February 21, 2010
I know nothing about baseball. Okay, let's say I know very little about baseball. I know it involves two teams who hit a ball with a bat and run around some bases (four, including home plate) on a field called a diamond. And that's about it. I can't even use the excuse of being a girl because I know many women who know everything about the sport. I will use the "daughter of a football coach card" though.

Living in Florida, knowing something about baseball, or at least pretending to know something, seems to be a requirement, especially since the Sunshine State is home to the Grapefruit League (spring training). I'm living in the spring training home of the Tampa Bay Rays (Port Charlotte) and trying to catch baseball fever. This morning I headed out to the Charlotte Sports Park to practice with my new toy (Nikon D5000) and figure out the excitement. 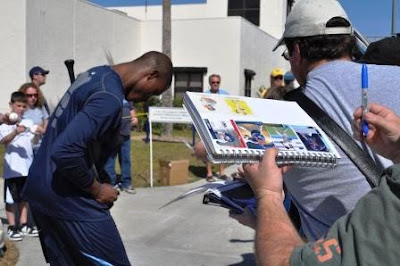 I'm guessing spring training practice (it's free! And begins around 9:30 each morning until March 4 when games begin) is much different than a regular season game. Fans seemed to be on a mission of capturing as many autographs as possible. Autograph collecting just isn't whipping out a business card and having the player sign the back of it. It's definitely much more complex.

Tampa Bay Rays fans came out prepared with bags of balls, extra ballpoint pens and Sharpies, baseball cards, bats, and photographs. I saw one guy with baseball cards attached to a notebook so all he has to do is hand the pad to the ball player. Another guy had a clipboard, also making it easy for the ball player to sign a photo or card. Those who were really prepared brought their own water to keep hydrated from the heat.

Sweet spot? What's that? All I know is I heard lots of giddy fans excited when so-and-so signed their ball on the sweet spot so it has to be important.

Yup, I have a lot to learn about baseball but I'll pick it up. Eventually. Or, anyone up for teaching me? Enjoy some of these snapshots taken today. When I figure out who the players are, I'll label the images appropriately. I followed the crowds and snapped photos of those the fans were excited about.
florida spring training baseball things to do in port charlotte

Matthew said…
I haven't gotten an autograph since I was 14--last time I was at a Yankee game and got Don Mattingly's autograph.