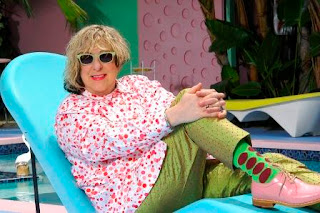 If you've ever grooved or sang along to Earth, Wind & Fire's hit September

then thank Grammy winning songwriter Allee Willis, the Queen of Kitsch. I've introduced you to Allee before and here's more exciting news...

She wrote that song and to celebrate the hit, she's performing a one-of-a-kind performance called "Badeya Baby"  September 21 & 22, 2012, at the North Hollywood Performing Arts Center in California. These shows will probably sell out so book early! Tickets begin at $45.99 and can be purchased on Brown Paper Tickets.

"Badeya Baby" is a greatest hits performing arts concert, sing-along, party game extravaganza promising to offer fan interaction unlike any performance before. The audience will be treated to a feast for the eyes and ears with Willis’ chart-topping collaborations while taking a walk down greatest hits hall of fame by hearing stories and watching behind-the-scene snippets of songs written by Willis and performed by performers as Earth, Wind and Fire, Patti LaBelle and Pet Shop Boys.

Learn more about Allee Willis by visiting her website or check out the Allee Willis Museum of Kitsch at AWMOK.com.

Disclosure: This post contains an affiliate link to support my travel habit.

Anonymous said…
The ace card is equivalent to a 1 or eleven as desired. King, queen and jack playing cards every equal 10, with different playing cards at face value. There are many variants of Tavla in Turkey, where the course of play modifications drastically. The ordinary tavla is identified as|also called|also referred to as} erkek tavlası meaning boys' 점보카지노 or males's tavla. The different variant kız tavlası (meaning women' tavla) is a game which depends solely on the cube and involves no technique. This variant does not involve cube at all and the play depends extra on hand-eye coordination than tactical decision making.
December 03, 2022 4:52 PM