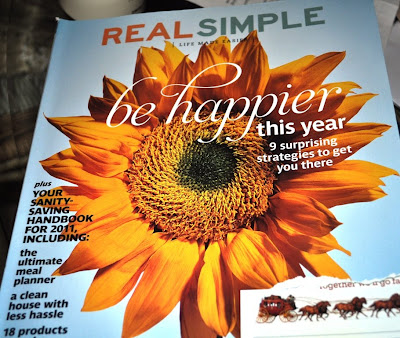 I really don't have anything profound to say to mark this occasion other than thank you for following, reading and commenting during the past five-and-a-half-years of this blog's life. To say it's been a roller coaster is an understatement.

But, it's a new year with new opportunities. To kick off 2011, I watched the Twilight Zone marathon on Syfy (which was interrupted by WWE's RAW on Friday night) and spent most of the weekend at home, trying to clean and downsize. Over the course of the weekend I filled a huge garbage bag with trash, recycled loads of plastic, paper and glass and took two garbage bags full of documents to be shredded. I deep-cleaned my bathroom (almost as well as my mom does) and did about four loads of laundry.

I made a rockin' bowl of vegetarian chili, found in the January issue of Real Simple (before recycling it), met up with a friend for lunch, watched football and a movie at another friend's house and had a great conversation with a longtime Yellowstone pal. 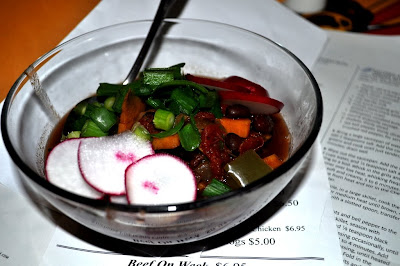 After all this, I still don't feel accomplished. My apartment still looks like it's full of stuff - and it is. I just need to chip away because later in the year I want to buy a house and want to move as little as possible.

Slow-Cooker Vegetarian Chili Recipe from Real Simple- if you'd like to try it yourself, head on over to Real Simple for the recipe. I followed it to the tee with the exception of the sour cream and tortilla chips. No need for them but did top it off with radishes and scallions. The radishes seem a bit strange but tastes good. This recipe has the right amount of spicy, heat kick and I'll definitely be making it again.
blogging cooking life me recipes

jhuber7672 said…
LOL! Thanks for reading :) Yeah, get in the habit but I know it's not always easy. I'm going through a dry blogging spell right now. Maybe you should write a book or two - I know you have some tales. Or take your blog posts to write a book!
January 09, 2011 6:48 PM