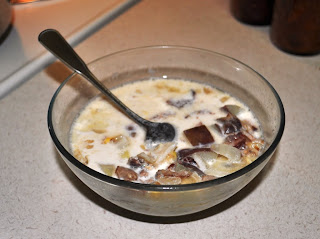 Homemade corn chowder is one of the most delicious foods and tasting it always reminds me of home. I love the milky and salty base along with the texture of pork and corn. My mom makes and grandma made the best corn chowder and when a friend brought me back fresh corn from Wisconsin I knew there was only one thing to do with it: make corn chowder.

First, the Wisconsin corn. Yum-ola! I realize Florida is heavy into agriculture but there’s something about vegetables grown in fertile soil of the North. The corn was incredibly sweet and crisp – absolutely delicious. 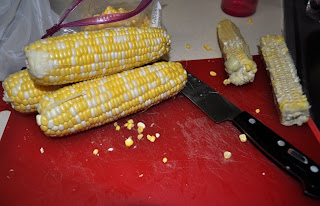 Second, the recipe. I asked my mom for it and she sent me grandma’s version. Here it is:

Salt Pork (you can use bacon if you would rather)
Onion
Evaporated milk
Potato
Corn
Milk or half and half or cream.

So grandma’s cooking instructions are as follows:
You can add other ingredients if you want such as parsley, grated cheddar, etc. on occasion. You may want to try some other spices, too. 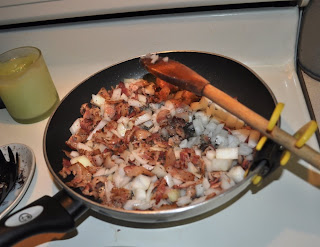 Hmm. Being one who enjoys cooking but not proficient at it, I did my best to replicate the recipe and importantly, the taste. This is how I made it:

Pound of Peppercorn Bacon (I shopped at Walmart and they didn’t have salt pork)
Medium Onion – Diced
One Can of Evaporated Milk [Note: My Mom told me I should have added two cans because of the amount of milk I used; but it still tastes fantastic with one can and plus, I don’t know what the purpose of evaporated milk is]
Five Medium Red Potatoes – Boiled with Skins then Diced
Four Ears of Fresh Wisconsin Corn
Half Gallon of 2% Milk
One Quart of Half and Half 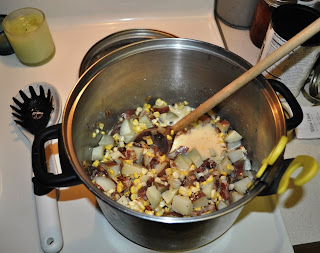 Do not boil – it’ll curdle and make you sad you can’t enjoy the incredible chowder.

I didn’t add any salt or pepper because the bacon had enough of both.

I froze much of the chowder and it freezes very well. When ready to eat I completely thawed it in the refrigerator before heating in the microwave in 45 second intervals.

imlanguages said…
It’s a great pleasure reading your post. It’s useful information. I am really impressed by the way you detailed everything. It’s very informative and you are obviously very knowledgeable in this field. Thanks for sharing such an amazing post. Blast chillers.
October 14, 2020 1:07 AM

qymhzh4eps said…
With 3D printing, a patient may potentially stroll in with a broken tooth and stroll out with a pearly smile. The materials used in 3D printing aren’t dangerous to the surroundings. The precision of the printing leaves little or no waste, some of which may be recycled or biodegradable. One of the reasons why why} dental prosthetics can take how do styluses work weeks to make is by sending them off-site.
January 07, 2023 6:20 AM