Yeah, I've been a bit neglectful of this blog - so sorry. But, I have been making somewhat regular posts over at SoloTravelGirl.com. 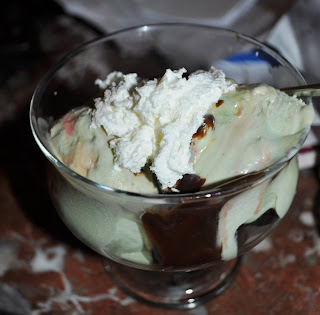 I served it atop fresh baked brownies, hot fudge (dropped hot fudge underneath the brownies) and whipped cream. Although the ice cream froze overnight it was still soft and melted rapidly, but maybe the hot fudge had something to do with it. I also discovered M&Ms may not melt in your hand but they will bleed in an ice cream mixture which caused the green ice cream to turn an olive green. The ice cream was very minty and if I make it again I'll reduce the amount of mint. Overall, it was delish!