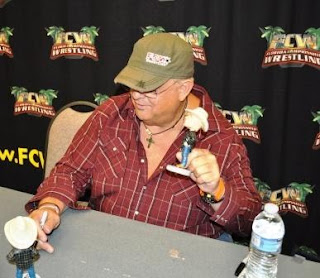 Here's a secret: I grew up watching professional wrestling. Yup, there, I said it. So when I heard the American Dream, Dusty Rhodes, was rolling into Punta Gorda last week, I had to go.

The Charlotte Harbor Event & Conference Center seems to be the ideal venue for professional wrestling, this is the second time I've attended a Florida Championship Wrestling match at the fairly new venue (grand opening was January 2009; first match I attended was in Dec. 2009 where Ricky 'The Dragon' Steamboat made an appearance) and others have been held there, too.

The night card for Friday night (July 30) included eight events. Can't call them all matches because when the FCW Divas came out, they held a limbo competition. At first, thought it was pretty lame but it was actually pretty clever planning on the organizer's part - it was a way to have the Divas perform without wrestling, for whatever reason.

The night included some tag team matches and one-on-one events. Was disappointed there wasn't a battle royal at the end but the evening was exciting enough. I can tell you who won but I'd spoil the fun for those not in attendance and waiting to view it on Bright House Network on Sunday night at 6 p.m.

And for those who don't know, FCW is considered the minor league for World Wrestling Entertainment (WWE). When Dusty Rhodes came out after the first (or second) match with FCW Diva Aksana on his arm, he received a standing ovation. In some ways, it seemed as though it was a changing of the guards. Rhodes told the audience many of the performers wrestling that night will someday join the WWE circuit.

KIX Country 92.9 had a guest announcer at the match for one match and I swear they announced him as Trooper Roy but I can't find anyone on the station D.J. with this name. But who knows, maybe he's not a D.J. Would make sense to have Bob Alexander announce a match, since he has been inducted into the Florida Boxing Hall of Fame. But who knows, maybe he WAS the guest announcer and I heard and wrote the wrong name down. Anyway...

So, I stood in line almost 90 minutes to meet Dusty Rhodes, shake his hand and have him autograph a postcard. Nice guy. Fun evening. More images can be found on my Flickr account.
celebrity Dusty Rhodes entertainment things to do in punta gorda