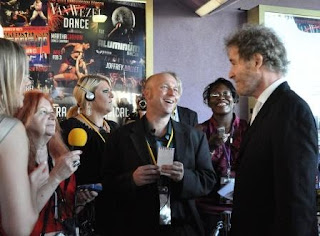 12th Annual Sarasota Film Festival Kicked off tonight. No live Tweeting for me this year, as explained in this post on my Solo Travel Girl blog and I can't afford to attend all the events so... the plan was to stalk the red carpet tonight - opening night.

And the on-camera star power on the red carpet? Kevin Kline. There could have been more celebs, I just didn't know who they were. I don't know if other celebs showed up for the post-film parties but hope to take in some stargazing next weekend.

I realize a film festival is suppose to be about substance, about filmmakers selling movies and maybe that's what the Sarasota Film Festival is doing - focusing on the business aspect.

You can read more about tonight on my Solo Travel Girl blog.
celebrity sarasota film festival