January 31, 2010
Despite all I had to do (or at least what I should have done) this weekend, I joined in the celebration to bid good luck to 2010 Winter Olympic-bound U.S. pairs figure skaters Caydee Denney and Jeremy Barrett (pictured: doesn't Caydee look like America's next sweetheart? And I'd much rather sport a Caydee Denney hairstyle than a Dorothy Hamill wedge although my hair probably can't do either) and Amanda Evora and Mark Ladwig yesterday at the Ellenton Ice and Sports Complex in Ellenton, Fla. 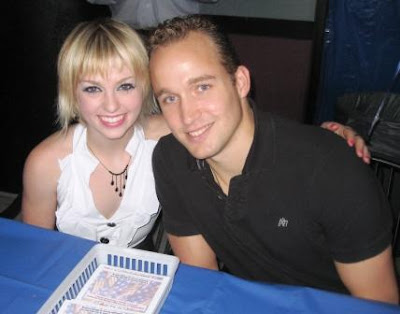 Yes, Florida is producing figure skaters for the Winter Games in Vancouver which in part is due to the coaching team of Jim Peterson, Lyndon Johnston and Alison Smith and to the excellent training facilities in Ellenton.

Amazingly, I've uploaded some photos on Flickr and someday I'll post at least one video (although it's evident I need better cameras!!!) but enjoy this recap in my article titled, "Florida Skaters Heading to 2010 Winter Olympics: Pairs Skaters Denney & Barrett and Evora & Ladwig Represent Team USA." Be sure to check out which skaters are dating! 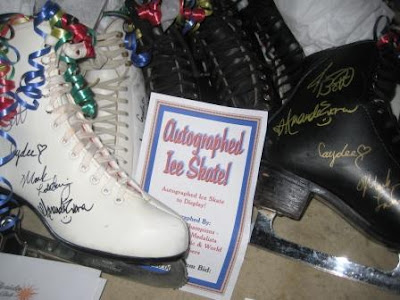 The above photo are skaters for the silent auction which were autographed by the Olympians. Proceeds of the silent auction and raffle benefit the skaters' families so they can make the trip to Vancouver and the Southwest Florida Figure Skating Club.

nanlmille said…
Hi J.A. Huber! I am Nancy Miller, a writer for AC and an avid figure skating fan. I really enjoyed reading about the sendoff for the Florida-based pairs skaters. I saw Denny and Barrett win at the U.S. Nationals on TV and I thought they were spectacular. Nice to "peak" at just the right time... Cool that Florida is starting to produce top figure skaters. Can't wait for the Olympics. Great article/blog entry--Nancy
February 08, 2010 5:48 PM

jhuber7672 said…
Hi Nancy. Thanks for stopping by. I'm excited to watch the Florida skaters tonight in Vancouver. Fingers crossed for them!
February 14, 2010 7:52 PM