Whisker Away from Being Crazy Cat Lady

Three cats in the possession of single woman is the definition of a crazy cat lady, at least according to ABC's 20/20 and the story they ran last week called, "The Line Between Cat Fancy and Cat Crazy."

Friday was one of those feeling sorry for myself nights and tuned into 20/20 where domestic violence was the apparent theme. What can be a better ego-booster than watching stories about women in abusive relationships knowing being single, I can do what I want and no one is beating up on me or trying to kill me?

The first story was about teenager who had her jaw blown off by jilted ex-boyfriend in an attempt to kill her. The end segment was a follow up story on Rhianna and the impact her interview the week prior (about Chris Brown beating on her and saying buh-bye to him) had on other women in abusive relationships. 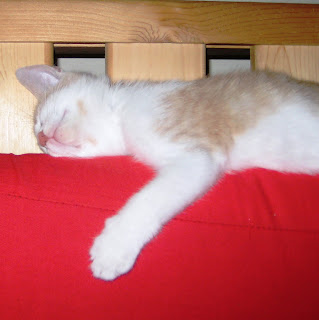 I'm pretty certain terms like "pathetic" and "lonely" were used during the piece. Ouch! How insulting to single women with any number of cats. The filmmaker who documented the lives of four cat ladies has apparently deemed herself an expert in determining what makes a crazy cat lady and according to her I'm on the brink!

Yikes! As if I'm not self conscious about living single and all the insecurities associated with that (like people starring at me while dining alone) I now need to worry about others thinking of me as the crazy cat woman on the brink when I'm shopping for gallons of cat litter and Fancy Feast.

So what am I gonna do about it? Not quite sure. I'm definitely going to make an assertive effort to socialize more - with humans, not felines - and post fewer photo of my fur-children, err... my two kitties.

Check out this excellent article by Bella Depaulo called "Whose Really Nuts 20/20 or 'Crazy Cat Ladies'" and her reaction to the segment. Do we have a cat fight on our hands between single gals with kitties and 20/20? Perhaps.
Crazy Cat Lady life me

Matthew said…
I think it has more to do with how you treat your cats. Do you dress them up in costumes and talk to them like they're people who understand you?