November 15, 2009
Yesterday can be summed up as "superb." I spent the the day in Sarasota, my old stomping grounds, experiencing some of what's new and enjoying some of my old favorites.

It started with picking up a ticket for Stephen King's talk at the Van Wezel Monday night along with voucher to purchase a signed copy of Under the Dome, which was released Nov. 10. The deal was brokered via eBay and while I should have faith in the credibility of eBay users, I was leery in the deal. Alas, all ended well. 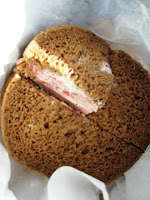 Next was a visit to the Sarasota Farmers Market and an event called Sarasota Naturally with all sorts of tips for living well. A visit to Anna's (128 N. Orange) for lunch was next - my favorite Sarasota sandwich shop. They have delicious signature sandwiches like the "Surfer" (ham, turkey, swiss cheese and cucumber stacked on their unique "Can Bread" and topped with Anna's sauce). It's been about 5 years since having an Anna sandwich and although I craved the Surfer, opted for the Fiesta - liverwurst, salami, swiss cheese and onion on pumpernickel bread. Yum! (Pictured)

Sarasota is the new baseball spring training home of the Baltimore Orioles and yesterday was Orioles Family FanFest for both the residents and Orioles organization to get to know each other. Hall of Famer Jim Palmer was present along with manager Dave Trembley and players Brad Bergesen, Jim Johnson, Adam Jones, and Nolan Reimold. 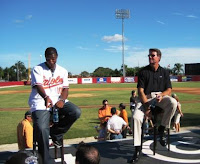 The afternoon included a free hot dog, soda, ball cap, a fan forum with Q&A, and autograph session. Drawings were held for prizes, too. Getting caught up in the excitement, I gathered autographs, too, and need to figure out who to give them to. Catch video of All-Star Player Adam Jones answering a question regarding off-season training right here on YouTube and pictured above is Jones and Palmer. Additional photos can be viewed over on Flickr right here.

Up next was a trip to the theatre, the movie theatre that is for The Men Who Stare at Goats - loved it! Smart comedy.

And, the evening was topped off with the inaugural roller derby bout for the Sarasota Roller Girls. It was good catching up with friends who also came out to see Sarasota history in the making. Considering the team's been around for three months, losing 182 to 61 to Fort Myers Derby Girls ain't THAT bad. They have plenty of time to train and prepare for 2010. I captured some video and have one posted on YouTube right now, check it out.

I spent most of the day alone although I was constantly around people. I saw former colleagues during FanFest and it was great catching up with them and meet new people. As I write this it's Sunday night (which most of the day was spent preparing for company) and I'm saying goodbye to another weekend. I have the Stephen King lecture to look forward to tomorrow and will have a short work-week before taking on the next adventure.

florida spring training baseball things to do in sarasota