Thanks Publix for a Crowd-Pleasing Dinner: Linguine with Shrimp and Pine Nuts 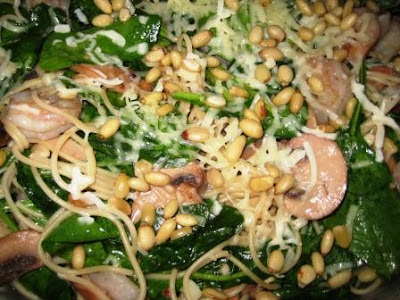 My Publix Grape magazine arrived last week and the cover showing plump shrimp atop linguine with spinach, pine nuts and mushrooms made my mouth drool. The recipe read as though it was easy so I opted to prepare it Friday during my day off then served it to a couple of friends on Saturday night. The verdict - definitely a crowd-pleaser! Although, the shrimp were a bit rubbery probably from being re-heated in the microwave. But, it went unnoticed.

Later this week I'll share what I prepared today - one of the most out-of-the-box entrees I think I've ever made and it was yummy!

Be sure to check out my travel blog to see my latest post called, "6 Self Portrait Tips for the Solo Travel Girl."

Okay, I thought maybe the recipe for this would be on the Publix site but wasn't so here goes:

Ingredients
12 ounces fresh or frozen shrimp, peeled and deveined (I used frozen)
8 ounces dried linguine pasta (I used angel hair pasta - it's what I had on hand)
3/4 cup chicken broth (I purchase it in a box so I can freeze the rest for future use)
1/2 cup dry sherry or chicken broth (I didn't use either but used burgundy I had on hand from the Julia Child recipe prepared last month)
2 tablespoons lemon juice (I use the juice from the plastic yellow lemon)
1/4 teaspoon crushed red pepper (Oops! Had issues with this and accidentally dumped in more than necessary)
1/4 teaspoon salt
1/4 cup pine nuts
2 cloves garlic, minced
1 tablespoon olive oil
1.5 cups sliced fresh mushrooms (4 ounces)
1 tablespoon butter
4 cups fresh baby spinach leaves (stuff from the bags works well!)
1/4 cup freshly grated Asiago cheese (1 ounce)

Step Three: Heat olive oil in large skillet, when hot cook shrimp, pine nuts and garlic over medium heat for 2 to 3 minutes or until shrimp are opaque. Remove mixture from skillet in another bowl.

Step Five: Add shrimp mixture from skillet and spinach to the pasta. Toss well and pour into a serving bowl and sprinkle with Asiago cheese.