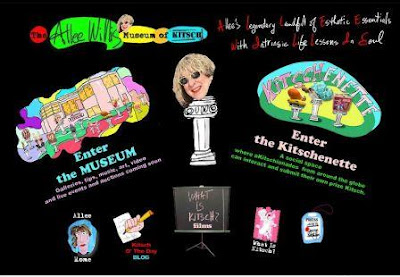 Today's a fabulous day for those of us who appreciate the kitsch side of life. You know, those special treasures from pop culture as original pink lawn flamingos, classic Charlie's Angels lunchbox or the plastic fish coasters I have in my living room (pictured). Today the Allee Willis Museum of Kitsch launched today (www.AWMoK.com) as a 24/7 museum where Willis shows off her amazingly large collection of kitsch. Yup, it's an online museum. How kitsch is that? 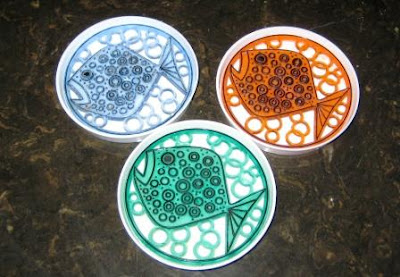 Visitors to the Allee Willis Museum of Kitsch can submit digital images of their own kitsch artifacts in what's called Kitschenette – the social space for Akitschionados from around the globe to interact. Several kitsch goodies have been submitted and to date those earning the Allee Willis Certifikitsch of Authenkitschity include: Lady Lipstick, a lipstick holder which has a little ceramic mermaid atop a ceramic bowl (?) to hold tubes of lipstick and Tired Ashtray for Your Butts – an ashtray which looks like a toilet and now being used to hold Q-tips and makeup brush.

So who is Allee Willis? Know the song, "Boogie Wonderland" and "September" sung by Earth, Wind & Fire? Willis wrote those. We must be kindred spirits, I LOVE "September!" Or how about the "Friends" theme song? Yup, another Allee Willis tune. I can go on and on but you get the idea. With more than 50 million records sold, she's a Grammy, Emmy, Tony and Webbie award-winning and nominated songwriter. The Los Angeles Times published a fabulous story about the Queen of Kitsch, appropriately called, "Allee Willis, Queen of Kitsch," check it out! 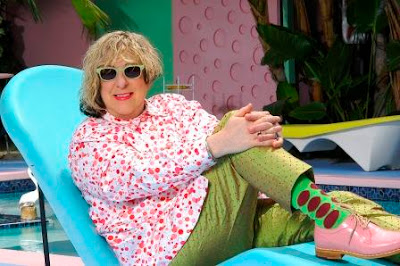 Not only did the Allee Willis Museum of Kitsch launch today but so did the "What Is Kitsch?" Film Festival on YouTube. Everyday between now and Sept. 21 a new video on the subject of kitsch will be posted so be sure to check out the YouTube channel here. Posted now is an introductory film called "What is Kitsch," think of it as Kitsch 101. Have something kitsch-worthy for the Allee Willis Museum of Kitsch? There's a film called, "Pitch Your Kitsch" with instructions on how to digitally submit that special, groovy item.

So stay tuned and I need to clear some camera memory to get something submitted. And I sure hope I can make a pilgrimage to meet Allee and see her collection of kitsch in person some day!
kitsch quirky quirky-kitsch