Could I Have Been a Victim or Did the Dude Have Innocent Intentions?

September 13, 2009
While traveling I'm alert and aware of my surroundings. My guard us up and using a phrase an Afghanistan security once said to me, I'm always "keeping my head on a swivel."

I rarely think bad things will happen to me while at home especially at 10 o'clock in the morning but the more I think about what happened yesterday the more freaked out I am about the incident.

Here's the deal: I'm walking to gym and just barely outside the apartment complex when a van pulls over and honks his horn at me.

"I need directions to Bank of America...I need gas and need to go to the bank for money...I'm heading to Ft. Myers and ran out of gas on the highway and the police gave me a gallon's worth."

I gave him directions to Bank of America while I stood away from the van. There was a black brief case in the front seat. I had my iPhone and was getting the exact address - which there are two a straight shot from where we were. And, he just passed three banks and numerous
gas stations. If he had a debit card he could've used it at any of those.

"Why don't you get in the van and ride with me to the bank?"

"No," I said, definitely beginning to be a bit freaked. I mean, who in the 21st century gets in a van with a stranger?

"No, don't have any money on me, which was the truth.

"Fine," he said and drove off. As he did I snapped this photo - notice no tag on the van but think there's one in the window.

Do you think this was someone legitimately needing fuel or someone with other intentions? 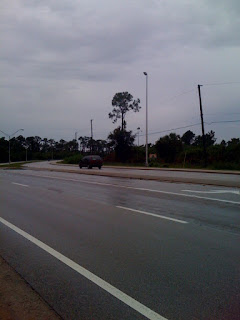 Marshall said…
Even if the stranger was only after money, asking you to enter the vehicle was totally inappropriate.

You did the right thing by keeping your head on your shoulders.

It's a jungle out there. Just reading your story made my stomach turn.

Now on to something nicer - I love your creations and will try and come up with a name for your dounut burger. Yummy.