Cooking Up a Frenzy with Julia Child 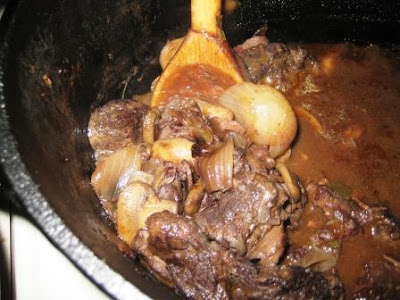 Not since I was a kid and obsessed with "Star Wars" has there been a movie that's inspired me. While "Stars Wars" inspired me to ... well... not sure what it sparked in me other than collect action figures, cards and write faux scripts...the flick "Julie and Julia" has inspired me to cook.

Days after seeing the movie I ran out to the local Books-A-Million for Mastering The Art of French Cooking, Volume One (1) (Vol 1)

. Now, I was almost CERTAIN my Grandma had this book and thought perhaps I now inherited it but checking my book shelf, couldn't find it so it was off to BAM where the cooking aisle was overwhelming with pomp and flash from young gun chefs on the Food Network. There were tons of Rachel Ray cookbooks and Guy Fieri's book was prominently on display but I couldn't find the Julia Child cookbook.

After seeing "Julie & Julia" I have a new appreciation and fondness of Julia Child. She seemed to be an ordinary woman head over heels in love with her husband and vice versa. Now, the celebrity chefs don't seem important. They seem superficial with their easy, quick, 30-minute meals because the message behind the cookbooks seemed to be profit versus good food.

Disappointed I couldn't find Art of French Cooking, I wandered throughout the store and returned to the same aisle just in case I missed something. And then I heard the sound of angels - smack dab in the middle of a shelf standing upright was the cookbook! Not sure if it had been there all along or if staff just stocked it but in either case, I snatched it up.

Next was the hunt for a vintage apron and being impulsive, I forwent the Internet and headed straight to Goodwill where I found a suitable culinary garment.

Off to the grocery store because I didn't have all the ingredients or the cookware. I picked up a nice Paula Deen 3.5 Quart Cast Iron Covered Round Casserole

which will come in handy. My cooking frenzy to make Boeuf Bourguignon (beef stew in red wine, with bacon, onions and mushrooms) began at 10 p.m. and either I was channeling Julia Child or was working on late-night adrenaline because I felt like a master chef sauteing and flipping mushrooms, browning pearl onions and cubing my grass-fed beef. By 3:30 a.m., the dish was complete and the aromas infused the apartment in a good way.

Since it's just me, I've been feasting on my homemade creation since Thursday night, not a bad thing. I'm now plotting my next dish, perhaps an nice chicken dinner.

And don't forget to check out my new travel blog, SoloTravelGirl.com.
cooking me