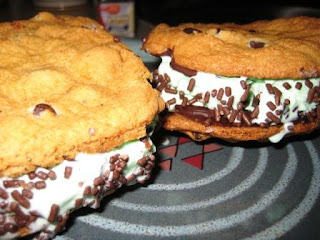 Once again I'm sucked into another season of Big Brother. Although the CBS reality show isn't commonly associated with cooking, a Big Brother After Dark episode inspired me to make ice cream sandwiches almost like the ones house guest Lydia - the tattooed special effects makeup artist - made.

Lydia's Ice Cream Sandwiches:
Chocolate Chip Cookies - looked as though she baked them in a pan then cut them into squares.
Mint Chocolate Chip Ice Cream

Viola! The Big Brother 11 ice cream sandwich is pictured up top. Look close to see the melted chocolate. And the taste? Definitely a crowd-pleaser. A friend who's a big fan of Lydia was my taste tester and he said both varieties were winners. I realize I have an upper hand over Lydia since the only secret ingredient she probably has is Big Brother slop and maybe an anchovy or two.

Fix yourself a batch for Thursday's eviction, should be another heated episode.
reality tv recipes

Matthew said…
Homemade ice cream sandwiches? I hate you for giving this idea to me. I better start going to the gym more often.
August 21, 2009 11:19 AM

imlanguages said…
I liked your way to express your views in this post. It’s a great pleasure reading your post. It’s useful information. Keep it up and in the future sharing more articles like this. Thanks for sharing this article here. Blast freezer for sale Australia.
August 26, 2020 5:26 AM

imlanguages said…
I am amazed by the way you have explained things in this article. You are sharing a piece of nice information, it helped me. Keep it up and in the future sharing more articles like this. Thanks for this message. Best batch freezer Australia.
September 26, 2020 2:56 AM