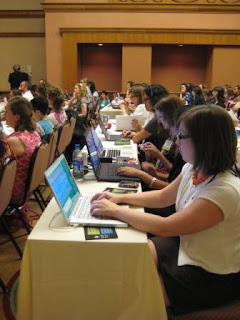 Note: I originally wrote this past midnight last night (this morning) yet didn't get around to doing so. Apologies for the delay...

It’s just past midnight here in Chicago and day 1 of the BlogHer experience is settling in. There are about 1,400 attendees, all with the same passion. I’m wrapping my head around all that was discussed during the informational sessions but one immediate thought I had about the experience so far is: I’m so far behind in blogging. Four years ago when I started this blog, I had no idea how far ahead of the curve I was. And, that wasn't even my first go-around at blogging, I had another site before before blogs were widespread.

Just after one day, BlogHer has been a validation and inspiration. Met a woman who read and complimented my Tallahassee blog which validated why I started it. I've been inspired by the creativity in blog topics and how specific women have been able to turn a hobby into an income stream. It's also been fun seeing and meeting other bloggers/Twitterers I read and interact with.

But, while I was ahead of the curve four years ago by beginning this blog, somehow I’m behind the times. Most of the bloggers I met started their blogs within the past 18 months and have major sponsors supporting them. Granted, most are running mommy blogs and/or frugal blogs, which with the current economic conditions, makes sense, but on the flip side, what have I been doing wrong to be stuck in a rut? Perhaps the attendance skews more towards new bloggers than seasoned? Who knows. But here are thoughts as to why I haven't been successful and ways I can get back on the right blogging track:

Inconsistency. There, I said it. I've been inconsistent since about April or so and I'll be working on that by creating a schedule to carve blogging and posting time.

Marketing, or Lack Of. Which seems silly since my career is marketing yet, I haven’t elevated myself with my blogs. That’s changing because I invested in business cards and actually handed them out here. I now have a promise to potentially new readers.

Hate Rejection. One gal I spoke to this afternoon said she’s been blogging for less than a year and had a sponsor who gave a computer to giveaway. She said she also receives free vacations because she contacts loads of PR people to ask. She said for every 10, she receives nine “no’s” and one “yes.” I need to be proactive in soliciting sponsors and advertisers.

Been Throwing Spaghetti Against the Wall. QuirkyKitschGirl.com has been all over the board with topics ranging from living single to emotional feelings and travel to roller derby. QKGTallahassee.com was successful because it was a targeted niche, a micro-travel site encouraging things to see and do in Tallahassee and encourage travel to the destination. Seems as though niche blogs do better than across-the-board ones. Hence, SoloTravelGirl.com was launched. Let’s see where that flies in the next six months.

I've Under-valued My Skills. My jaw dropped when I heard what bloggers are being compensated per post. Wow. I've under-valued myself for both sponsored posts and writing/blogging for others. That'll change for future ventures.

As the conference wraps up, I'm sure to have other thoughts and ideas on moving forward.

In the meantime, check out the my YouTube channel here for a couple of videos of Carson Kressley from “Queer Eye for the Straight Guy” and “How to Look Good Naked.” I've also started a BlogHer09 Flickr set on my account here.
blogging blogher celebrity

Unknown said…
I'm glad you're learning lots and having fun, but make sure to share some of the secrets, like how to get the sponsorship and all that that you talk about here, with us guys too! :)
July 25, 2009 11:08 PM

Matthew said…
I didn't think that many PR firms paid attention to bloggers...think I better start approaching people for the literary journal rather than waiting for them to approach me.
July 26, 2009 7:33 PM

jhuber7672 said…
I'm still trying to crack the Mommy Blogger Mafia code and when I do, I'll definitely share it with my blogging buds!

Yup, more PR firms are paying attention and during Travel Blog Exchange on Sunday (TBEX) that was discussed, too. Even Disney's looking at bloggers. In my job as a PR pro, I work, pitch and welcome bloggers into the destination and help as much as possible. Times are a changin'!
July 29, 2009 1:26 PM