Yankee Tripper Rocked it Out! 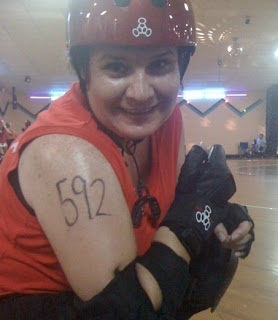 It's after 1 a.m. and I'm unwinding from an awesome night following my roller derby debut. I'm in pain but the adrenaline is hiding it. Ice packets are reducing the swelling on my ankle, knee and hand and just took two Aleve to reduce the pain.

Skating in the bout was soooo worth the pain I'm in now. When I learned Thursday I'd be skating in the intra-league bout, I was filled with excitement and nervousness. I was a true wreck today up until the whistle's first blow. I thought of ways on how to get out of skating. My stomach fluttered with butterflies and thought I was going to be sick before it all started.

I was afraid I'd trip and fall during my introduction. And I was worried...well, I'm not sure why I was so worried for the rest of the night. Once I got skating and going, it was all alright. Okay, it was more than alright, tonight totally rocked!

I felt a bit like a rock star and as the bout progressed, the more comfortable I felt. The match was divided into three, 15-minute period with 2 minute jam sessions. Since there were 11 of us on each team, we skated every other jam and I didn't feel fatigue until the third period when others got tired and sloppy, which is where I sustained most of my injuries.

Did I fall? Oh, yes indeed. Not sure if I'll have any respectable derby bruises in the morning. Thank goodness for protective equipment!

It was also an incredible feeling having friends in the crowd supporting me. Val from Tampa Bay came down, folks from Northport came up and Matt and his posse came out from Sarasota. Thank you, thank you, thank you for everyone's support!

As the night progressed, I became more comfortable in what I needed to do as a blocker and towards the end, gave some respectable hits earning accolades from the more senior roller girls. Our team won which meant we got to take a victory lap and "high five" the other team as well as spectators. What an incredible rush!

A trip to The Distillery bar in Bradenton followed (they're a sponsor) which included mixing with teammates and fans, eating some delish pizza and the traditional derby bar walk (see photo here and yes, I danced on the bar, too, just like I did in Nashville at Coyote Ugly oh so many years ago).

Sadly, I think that's my only roller derby bout of the season. Think I'm attending a conference during the next home bout but will need to check. Even if tonight (last night) was my sole bout of the season, I'll still continue to train and work on my skills.

Time to run, err, hobble to the freezer to pull out a fresh ice pack or two.
life making of a roller derby girl me

Matthew said…
Congratulations! You're on the winning team. I would've enjoyed the fun after the bout a bit more.
June 27, 2009 4:39 PM