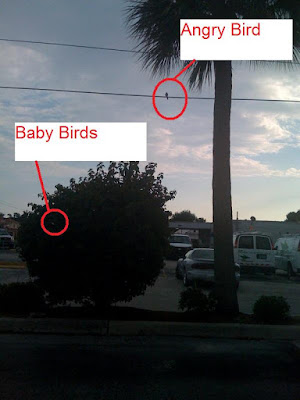 Tonight was one of those, "Let's grab dinner at Spazzi's" nights with @linbarfield. Spazzi Italian Grill is a tasty little restaurant in Punta Gorda worth visiting over and over again. Take a gander at my eggplant parmigiana, yum!

Getting out of the car and walking towards the restaurant, I was dive-bombed by a mocking bird but didn't notice it until @linbarfield pointed him out and warned me when the bird swooped around and back at me then dive-bombed her.

We giggled a bit into the restaurant and told the servers who also had similar experiences. Fast forward to leaving...

I was armed with my Flip video camera, locked my lens on the angry bird and made our way to our cars. Not sure what happened except I was screaming with laughter as the darn bird swooped down towards my head as I got into my car.

@linbarfield then pointed out there was a bird's nest with baby birds in the bush next to where our cars were parked. (Notice the photo.) I got into her car but when I did, I felt my hair being tussled around and realized it wasn't someone tall, dark and handsome (or tall, fair and handsome) but it was the angry bird!!!

Screaming with more laughter, I took a bit of video of the babies but was afraid the bird was going to attack while sitting in the back of the car. It didn't. But when I was ready to get back into my car, the angry bird was squawking on top of it keeping an eye on me. @linbarfield suggested having a sealed plastic tunnel to get me from her car to my car.

When the angry bird flew to a palm tree, I quickly ran out and hopped into my car without incident but loads of uncontrollable laughter.

Before leaving, I warned a woman who pulled up and was chatting on her cell phone. Not sure if she understood what I was saying but I tried.

So where's the video? Well, in the excitement of being dive-bombed, I must have hit the "off" button because the best part is missing, although the there is some pretty funny footage. I'll try to get something up later this week.
life me quirky

Anonymous said…
But what kind of bird?
Your dinner looked very good.
Glad you enjoyed it.