April 15, 2009
All good things come to an end and today I picked up my last organic veggie share from Worden Farm in Punta Gorda, Fla. It's been a delicious 20 weeks of fresh, organic vegetables and occasional fruits. It was like Christmas each week when opening my box, unsure what yummy goodness was waiting for me. 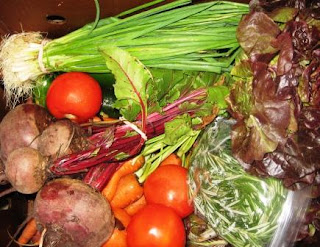 I'm disappointed in myself that I didn't utilize the contents as much as I should have, I had originally planned to eat three meals a day, all week with the contents, but I let time control me and ate out too much (especially at fast food joints) over the past few months due to convenience. *sigh* Perhaps next year I'll be better at that.

I also ordered an extra 10 pounds of beets with hopes of pickling and canning them but not sure when I'm going to have time to that in the next two weeks but suppose I'll just have to find the time. And look at the size of one of them! It's a feast in itself.

Now that the season is over, I'll have to return to thinking about what to purchase and where. 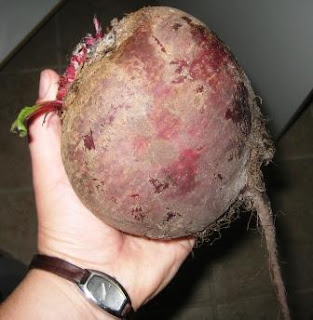 Interested in getting your own veggie share next year? Worden Farm membership opens on June 1 for new members and with the organic, natural food movement, jump on the bandwagon early if interested. Don't live in Punta Gorda? Neither do I so Worden Farm offers several drop off points if you can't go to the farm. Pick up locations are located in Sarasota, Nokomis, Venice, Port Charlotte, Cape Coral, Fort Myers, Sanibel and Bonita Springs.