Zipline Safari at Forever Florida: Jane of the Jungle

March 26, 2009
"Look out for that tree!" Well, that's not exactly what was yelled during Sunday's zipline adventure with Florida EcoSafaris at Forever Florida. It was, "Grab the orange rope!"*

I'm not sure what's in human nature to hand over 60 bucks, put on a belt, get hooked up with two clips to a cable and trust the man I just met and says, "Zip ready."

It was a leap of faith stepping off the tower's platform and letting gravity take its course. Wow! What a rush to literally soar 50 feet above the Florida wilderness at speeds up to 20 miles per hour. I was flying like a bird, a big awkward bird, but a bird none the less.

Kidding aside, it was a bit scary and upon reaching the top of the first tower (which was 50 feet) I had one of those, "What are you thinking?" moments. Upon landing on the second tower, I looked around and decided there was no turning back. The only way down was to plummet to the ground or get hooked up to the high tension cable and zip my way across. There were no steps down from this tower. 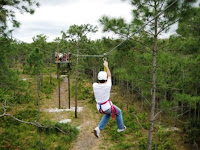 Here's the truth on what I thought when I landed on the first tower, "Ugh!"

I body slammed the guide who was grabbing us zippers (or is it zipliners?) as we arrived. A zipline is dependent on gravity and the greater the incline the greater the speed and velocity. Which meant, upon approaching the tower, the only way to stop was to body slam the guide, who in turn was slammed into the telephone-like pole. Of course, the guides (2 of them on the journey) just extend a foot and step onto the platform with ease. They made it look so easy.

"Oh, yeah," Laura the Florida EcoSafaris guide said. She's probably 100 pounds soaking wet but a tough, strong gal. The Zipline Safari's weight limit is 275 and while I'm far from that there were a couple of sturdy fellows pushing the limit yet she caught them with almost perfect grace.

I've never been on a zipline and it's not as easy as it looks. We were instructed to hold the belts - which are clipped to the metal thing that sits on the high tension cable - at the top and steer like steering a car into a turn when losing control on ice or slippery surfaces. Okay, easy enough, so I thought. First run, I was able to stay in control. Second run. Hmm, not so lucky. This landing had a little twist, feet needed to be raised over the utility cable plus grabbing the orange rope. 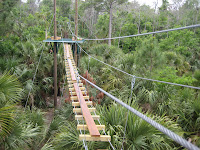 Thought I had this all straight and I was the first one sent across and I'm not sure what happened next. I started twisting around and ended up gaining speed while heading towards the platform back first. "Feet and orange rope. Feet and orange rope."

Feverishly, I tried to twist around as the tower was fast approaching. The next part is a bit hazy and seemed to play in slow motion. I didn't raise my feet so they brushed the top of the cable, I grabbed the orange rope and the guide grabbed me as I once again body slammed her with WWE perfection (World Wresting Entertainment for those of you in the unknown). My landings on the following runs were much easier and I attribute it to a combination of figuring the ziplining thing out and they didn’t build up as much velocity. 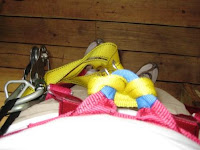 Another highlight of the Zipline Safari? The sky bridges. Think Indiana Jones meets The Amazing Race. Skinny planks set atop slats of wood suspended over an alligator infested pit (Okay, that's a joke, none of the watering holes have alligators, yet.) which bounce out of control when one person walks across. Then there are sections where it looks as though there should be a plank but there isn't. It takes a loooong step to make it to the other side. Did I mention it was raining making the bridges a bit slippery? We were all tethered to the cable above so if someone did slip we wouldn't fall.

And speaking of The Amazing Race, with each zip I felt I was one step closer to being a contestant. I just need a partner. Anyone interested?

Here's my video on YouTube taken during a zip.

*The Orange Rope: On most zip runs it was mandatory to grab the orange rope in case we bounced back up the line and the guide could pull us in.

Photos: Zipping, Sky Bridge, and Me all Suited Up
florida travel orlando travel things to do in Florida

Anonymous said…
That sounded like a fun experience and I got a big laugh watching the orange rope go by on your video. The sound of your impact and the look on the faces on your fellow zip liners was perfect.
Good story and a fun video. I am glad you are happy to try things that scare you a little.
March 26, 2009 2:19 PM