You Can Get There from Here: Worcester, Massachusetts

March 08, 2009
Or, I could've titled this post, “31 Hours in Central Massachusetts.” Daylight Savings Time jipped me out of an hour this weekend but I still made the most of it. Read along on my journey…

I took advantage of the non-stop flights offered by Direct Air between the Charlotte County Airport in Punta Gorda, Fla., to Worcester, Mass. This gave me an opportunity to travel somewhere I would never have chosen randomly and enjoyed most every minute of the trip (driving in Massachusetts I can live without). 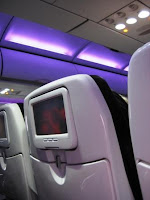 Direct Air flights are operated by Virgin America so the planes are tricked out with soft leather seats, satellite television, and a nice purple hue in the cabin – not that harsh white light. There are “hosts” on the flight vs. flight attendants and rather than listen to a mundane review of the plane’s safety features, an entertaining video rolls.

I wanted to focus my trip on the maple sugaring happening RIGHT now and took two tours during the 31-hour trip (note: the 31 hours does not include the 2.5 hour flight). I really wish I had more time to explore Worcester and Central Massachusetts, the region has so many dimensions to explore ranging from the great outdoors to the cultural scene. Here’s a rundown of what I saw/did during the trip.

Saturday
Emily the Sacred Cow – Statue of the Vegetarian Activist at the Peace Abbey. I found this pit stop at the Road Side America website. (Plus, I need to live up to Grandma's expectations in finding the odd places to visit!)

Natick Community Organic Farm – Maple Magic Day, being offered every weekend in March and most likely the first weekend of April, depends on the weather. As the name implies, it’s a working organic farm with chickens, sheep, goats, and bunnies. Can’t forget the fresh veggies! Tours were offered throughout the day for $5 which included showing some of the tapped trees. 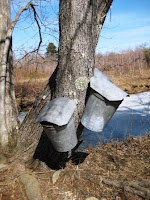 The Native American, Colonial, and modern ways of making maple syrup were demonstrated. The sugar shack – where modern maple syrup is made – smelled wonderful and it was almost like stepping into a sweet sauna. Since maple sap is 98% water, it takes a long time to boil off the water to make syrup (then maple cream, soft candy, then hard candy) so it’s an extremely steamy process.

They HAD maple syrup for purchase and when I asked before the tour if they had a lot, I was told yes, thinking I’d pick up a couple of bottles after the tour vs. carrying them around (it was too far to park the car before the tour). Bad mistake – they were sold out by 1:30 p.m.! Did enjoy a tasty lunch of root veggie soup, grilled cheese, and gingerbread cake.

Nashoba Valley Winery –Part of the Johnny Appleseed region of Massachusetts, the winery is in the middle of a fruit orchard. Stopped by for a tour but didn't think I’d have time for that before dinner (turns out I did, but who knew?). Stayed for a tasting of five wines ranging from blah (some kind of dry pear chardonnay – stay away!) to “oh, yea!” (After dinner peach, yum! Silky smooth and sweet as a peach.) Left with a bottle of the peach wine, strawberry-rhubarb, and cheese made by a local farm. 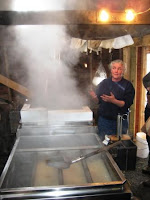 Stopped off at some random lake to see ice fishermen out on the yonder. I’m guessing yesterday was the last day of ice fishing for the season, temperatures were pushing 60 degrees the past couple of days and ice was melting.

Fireplace Feast at the Salem Cross Inn – My mouth is still watering from this feast which included fireside roasted prime rib, creamy and savory seafood chowder, roasted red potatoes, mashed squash, spinach pie, and apple pie topped with a generous plop of whipped cream. This place knows how to create a positive experience and is a true treat.

Dinner started before 7 p.m. so there were 90-minutes to kill, but the Salem Cross Inn has that figured out. Diners can assist in making the dinner’s apple pie by peeling apples with an 18th century table peeler and assisting with the crust. They can also help make the seafood chowder by stirring and pouring ingredients.

Horse-drawn carriage rides into the nearby field are offered during this time (sleigh rides when snow’s around) and mulled wine and cider is served inside. Diners munch on the homemade cheese log. Not sure what’s in the log but it was delish and shaped like a log!

Overnight in Auburn, Mass., at the La Quinta. There were adorable bed and breakfast inns to choose from but I was watching my budget and despite chatter about cheap lodging being available, I still ended up paying about 50 bucks and that’s with my AAA discount.

Sunday
River Bend Farm Visitor Center – Maple sugaring tours offered by the Blackstone Valley Sugaring Association during Maple Sugar Days. More in depth than yesterday’s tour and included actually tapping a tree, gathering sap from an already tapped tree, and pouring the sap into a giant barrel which will be used to make syrup and other tasty maple products. A demonstration of the Native American method of making maple sugar was shown (same process as Saturday – they did it by heating rocks in fire pits then placing the hot rocks in a log full of sap.). There was a visit to the sugar shack followed by a tasting of maple tea (sounds as though it’d be overly sugary sweet but wasn't), maple cream, maple sugar candy, and a cookie made with maple.

Vaillancourt Folk Art – If you love vintage holiday decor, this is the place. Handmade chalkware sculptures made from vintage chocolate and ice cream moulds.

To the airport and home! Ah, it’s so good to be home. I enjoy the journey but am always happy to be home to nest and rest.

Anonymous said…
Grandma would be proud! I hope you eventually got some syrup - if not - the Western New York Maple Sundays are coming up.
March 09, 2009 11:06 AM

jhuber7672 said…
I kept thinking how much she would've liked it. And I know how much she enjoyed maple sugar candy.

I didn't bring syrup for myself but brought back maple cream. I still have NY syrup and need to figure out what to do with it or get the recipe for maple tea - which I think is just water and syrup.
March 11, 2009 9:37 PM

Anonymous said…
Glad that you were able to visit Vaillancourt Folk Art's studios and gallery! If you can make it during the holidays you will surely love the festive decorations—in fact, the Saturday after Thanksgiving, we will be having Charles Dicken's great great grandson coming for a reading of The Christmas Carol.
March 17, 2009 3:02 PM

jhuber7672 said…
Hi Luke. Thanks for dropping by and including me in your online newsletter. I'm going to do a separate post/article about Vaillancourt Folk Art's Studios & Gallery, what a terrific place! Will let you know when that's written up or if I have questions.
March 17, 2009 7:47 PM