Part 1: Fulfilling the Need for Speed at the Florida International Air Show 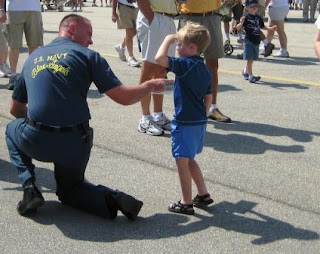 That sums up this past weekend. The sound of speed. Not because the weekend passed by so quickly and it's Sunday night but both Saturday and Sunday it was filled with fast-paced action: Florida International Air Show on Saturday and Zipline Safari at Forever Florida today.

I shared a little bit about the Florida Air Show at the Charlotte County Airport in Punta Gorda yesterday, but let me tell ya more.

Natural experiences and history usually rev me up more than man-made manufactured ones. When I was told about the air show being one of the biggest events in the area, I dismissed this wondering how could a bunch of planes making loopty loops in the sky. But when I attended the first press meeting with the Blue Angels last December, my curiosity was piqued and when I attended the press briefing the week prior to the event, I was intrigued. I was finally hooked the Thursday prior when the Blue Angles, an F-15 and F-16 were practicing overhead.

The event started at 10 a.m. Saturday with opening ceremonies beginning at noon. I arrived around 11 a.m. and wandered around finding the best spot to view the show. Obviously, the V.I.P. tents were the prime spots and thought my wristband would grant me access but those wristbands were given to a vendor, whom I saw at the entrance of the V.I.P. tent. Not discouraged, I browsed the exhibits including displays by the Army, Navy, and Air Force. Can someone answer me this, is there a connection between rock music and the military? Seemed all the present military branches blared rock music and the same music was played during the military air performances. (I did get into one V.I.P. seating area which didn't have the great food I was told about and gave up my seat for a Blues family member.)

Bud Light had the best display, it was free (a small fee was charged to take a photo with some of the aircraft). They had a tripped out semi that converted into a three-level lounge. Second floor was the photo session where they snapped two photos to create a hologram luggage tag (free!). Ground floor were cold samples of Bud Light and third floor was the lounge and one of the best views for the show.

The show included F-15 and F-16 demos, World War II aircraft like the B-25 Panchito which was part of the Doolittle Raiders, and the Double Trouble Wing Walking Team. The U.S. Special Ops Command Parachute Team couldn't jump due to the strong wings. Of course the highlight and saved for last were the U.S. Navy Blue Angels.

What's up with these guys? They're like rock stars with all the groupies who followed them around taking photos and getting autographs. I don't consider myself a Blue Angel groupie, I only took photos for journalistic needs. The best moment I saw and was able to capture most on film is that of the little boy above and the Blue. The boy posed for a photo with the Blue, then hugged his legs then as he walked away, turned around and gave a salute (on his own). It was a very touching moment.

The Blues were impressive on the tarmac and in the sky. Their entire performance is precision beginning with how they get into the jets to maneuvers in the sky to disembarking (is that the right term?) from the plane. Definitely takes a lot of pride and trust to pull off a successful show.

They zoomed at speeds of up to 600 miles per hour and flew low and loud over the audience many times. There were many moments to gasp at the near-collisions (intentional) and the how quickly they transitioned to another formation.

Lively commentary was provided by Danny Clishman, a popular air show commentator, and Charlotte County's radio personality Charlie Shoe. The day was quite a treat and I look forward to next year's air show. Although, it may be the Air Force Thunderbirds and not the Blue Angels. Stay tuned!

Check out some photos from the event here.