Other Twitterers During the Sarasota Film Festival March 27 - April 5, 2009 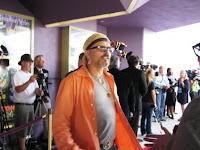 Have a thirst for independent fimls? The Sarasota Film Festival is in full-gear through April 5. I don’t have all access to the event as I was told (found that out last night) so I won’t be tweeting as regularly anticipated and won’t be making the one-hour drive up there as often. Which in a way, is a good thing, I need to get caught up on life. However, I’ll be attending three more parties throughout the event so stay tuned.

But, if interested in other juicy bits of what’s happening during the Sarasota Film Festival, here’s a list of Twitterers to follow for updates. When live tweeting during the festival, be sure to include the hash tag #SRQFILM:

@dtnmatt Matt Orr: Creator of ThisWeekInSarasota.com and I will show you behind the scenes of life in Sarasota

@GraciaMIA GraciaMIA: Sifting through the madness, one day at a time. Hold the title of Mama Goose to a fierce crew of PR up-and-comers serving SoFla, LatAm and the world.

@Onditimoner Ondi Timoner: Directed “We Live in Public” which premiered at Sundance.

@TVPromoGal L.C. Granger: Insane, eclectic, working mom of 3- my career is TV promotion- my passion is photography -my motto:BE CREATIVE and kick ass doing it!

Are you live tweeting during the Sarasota Film Festival? Know of someone else is? Leave a comment with the details.
celebrity entertainment sarasota film festival twitter