The Journey to Tlaquepaque, Mexico, and Angry Murals

March 02, 2009
The last two nights of my trip to Mexico were spent outside Guadalajara in Tlaquepaque at the Quinta Don Jose Boutique Hotel, a B&B-type inn. barb knows the owners (she seems to know a lot of people in Mexico and hasn’t lived there more than a year!) and I have to admit, it was a great, cozy little place. 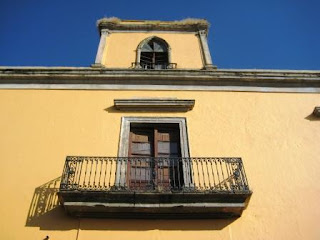 Tlaquepaque has a fantastic and thriving arts district and that’s what made me want to visit after barb described it to me. The Quinta Don Jose (which you can read my review here) was literally steps away from the downtown action and I felt extremely safe at the inn. It’s surrounded by a huge wall which gives it that bit of culture.

The day barb and I arrived to Tlaquepaque we hopped in a van on a guided tour of downtown Guad (Guadalajara for those not in the Mexican lingo). I now understand why barb didn’t want to drive in that craziness. Crazy driving, I tell you. Much worse that Florida drivers (hard to believe, I know).

We had a great English-speaking guide and in addition to finding a giant belt buckle for my brother-in-law, the highlight was seeing amazing fresco murals by Jose Clemente Orozco (1883-1949) in the Government Palace, built in the late 1700s. Here in the U.S. you’d expect to see murals with brilliant sunsets over lakes or a pretty pasture with fluffy clouds in a blue sky with flowers and fluffy bunnies in the foreground.

Not the Orozco murals. These are angry scenes depicting reality. The center mural of the stairway is influenced by the fears, tragedies, and crimes of 20th century societies. Another mural mocks religion while another mocks false leaders and false ideologies, was he foretelling war? Overlooking the murals painted on the ceiling is Miguel Hidalgo y Costilla, Father of Mexican Independence (photo). 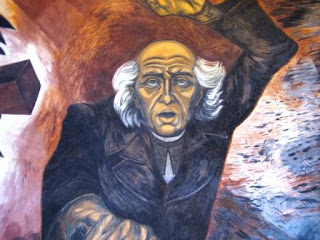 I asked the guide if there was symbolism with the priest’s shirt – doesn’t it look like an arrow perhaps signifying someone’s going to hell? All of the imagery is captivating in a train wreck kind of way. I was drawn in seeking details, the look of pain, fear, and misery on faces. They're disturbing, uncomfortable, and thought provoking. I searched looking for symbolism (other than that on the priest) but didn’t find any (that I’m aware of). I’d like to return to spend more time studying them. 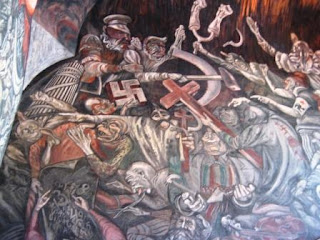 Thanksgiving dinner was spent at the bar enjoying happy hour (2 for 1 margaritas, woo-hoo! BTW – we’re NOT lushes!) followed by Mexican-style pizza. That pizza tasted soooo good! Mine had chicken, corn, and zesty jalapenos along with gooey cheese and a tangy sauce.

Our poolside room was perfect, I think it was a suite, it was big enough to be a suite, I think it was as big as my apartment! The staff was incredibly nice and I loved looking at all the sculptures in the hotel lobby. The owners “get it” meaning they brought in art from Tlaquepaque as a teaser for visitors to encourage them to venture out into the community. There were other Americans along with Europeans and Canadians staying at the hotel while some just came over for dinner.

Do I need to tell you about some of the rural areas of Mexico? Probably, I also need to get busy with uploading photos, but that’s for another day.

Heading to Mexico? Be sure to check my latest post at the Resort Rentals International blog about the Travel Alert to Mexico for Spring Break.
Mexico travel Mexico2008

Anonymous said…
AHA! you do want to come back to mexico!! i just knew you would appreciate it more once you were removed from it for a little.

georgia sent the link for your review of the hotel on to art and estela, and i'll send along the link for this blog entry.

i'm so glad you look back on your visit fondly. i sure had a great time.

Anonymous said…
I enjoyed your blog. Mexico is and always will be a favorite place to visit.It takes me a bit longer to acclimate and immerse myself in the local places in Mexico because of my limited Spanish skills but I always feel welcome.
Thanks for conjuring up some memories.
March 03, 2009 11:04 AM

jhuber7672 said…
Hi barb - yes, I'd love to come back and visit, especially since you'll be living in some new digs!

Keith - I had problems with the language a little bit, for me it gets tiring concentrating on what's being said and what I need to say. Many times I gave up on my Spanish.
March 04, 2009 10:57 PM