Food, Inc. A Must-see Film for Anyone Who Eats 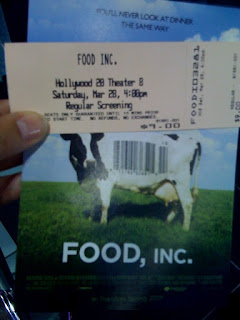 I'm not joking, EVERYONE needs to see the documentary Food, Inc., which I saw over the weekend during the 11th Annual Sarasota Film Festival. It was only by coincidence that my Saturday in Sarasota began with lunch at Veggie Magic, a raw food, organic restaurant, followed by the film about the contaminated and corrupt food system in the United States. After seeing Food, Inc., I've reached several conclusions:
We need to wake up and smell the manure coming out of the grocery store, pay attention to labels and demand more natural food. Not GMO (genetically modified organism) or GEO (genetically engineered organism) food and not ones with corn or soy fillers. And, we need to get back to eating chicken, beef, vegetables with blemishes and not just food. Eating something that was engineered to look exactly the same as a million other things is not natural (i.e.: chickens raised to be the same size). Real fruits and vegetables are meant to have blemishes and occasional weird knots. I want to eat a hamburger with the beef from one cow, not a hamburger made with pieces from 1,000 cows.

I often wonder if the food industry could be an avenue for terrorism. Our enemies have the patience that we have no clue about. I especially thought that during the contaminated food from China outbreak. Or, our enemies can be sitting back and taking pleasure in outbreaks such as E. coli and salmonella and hoping we implode soon. I know, the conspiracy theorist is running wild!

But back to Food, Inc.

The documentary will hit theatres this spring but check out the film's Web site for a list of film festivals it’s being screened. The Sarasota Film Festival introduced the Green Cinema Now! this year, a collection of features and shorts surrounding environmental challenges on the local and global scale.
entertainment organic sarasota film festival things to do in sarasota