Food is part of my traveling experience and I enjoy tasting the flavors of a destination. When I was in Miami last month for the Food Network South Beach Wine & Food Festival I headed down to Homestead and Florida City to meet up with a friend. In addition to stopping at the Schnebly Redland Winery (for a brief tasting and pick up a few bottles of wine) and Coral Castle (which was cool but I think a little over priced, I definitely recommend finding a guide and listening to the history come alive).

Whenever I visit that part of South Florida the highlight is visiting Robert is Here, a fab fruit and veggie stand on the way to Everglades National Park. I've been visiting the produce stand since working in the Everglades in 1996 (or 1995?) and would stop by to pick up a tangy key lime milkshake. I remember seeing Robert's kids working there and fast forward to 2009, they're still working there. While Robert hasn't aged, his kids have grown up to become young adults. 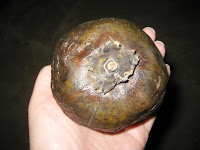 I could always count on finding unusual tropical fruits at Robert is Here and this trip I didn't leave disappointed. I picked up a black sapote which I've always been told tastes like chocolate pudding. Does it really?

I picked up a green black sapote and was told to wait until it's black before eating and was given an example of how dark it needed to be. I brought the green, round fruit home and for nine days I picked it up and examined it. By the 8th day I decided it was as dark as the example I was shown but decided to give it one more day. 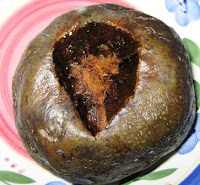 Day 9 - consumption day! It certainly felt like chocolate pudding in a plastic bag but would it have that chocolaty taste that makes Bill Cosby say "mmmm"?

I cut out the stem and slipped the spoon in and scooped out a blob of black sapote flesh. The insides certainly looked like chocolate pudding and it tasted like...well, it tasted more like a light vanilla pudding. It had a subtle sweet flavor and the creamy flesh was soft and velvety like pudding. Not bad but I don't think the folks at Jello have anything to worry about.