Mrs. Jane Henson gave a talk discussing how she met Henson (in puppeteering class at the University of Maryland) and how Henson fell into puppeteering (he was interested in television, his high school was looking for someone to do a puppet TV show and he took the opportunity, then checked out books about puppets). They later did a show, Sam and Friends, on the local D.C. news station and eventually national exposure. Jane seemed very modest and made it clear several times that she was the apprentice and ideas were Jim's.

I'm really glad I made the visit but disappointed I didn't spend more time seeing the actual Jim Henson's Fantastic World exhibit. The reception started at 6:30 p.m., after doing a quick change in the car, I arrived at 6:30 for some (more gelato - read on), and headed to the history center's second floor for the exhibit. About 10 'til 7 p.m., an announcement was made to head to the fourth floor for the talk. I figured there'd be time after the talk to see the exhibit but no! It was locked up, which was very disappointing. *sigh* But... 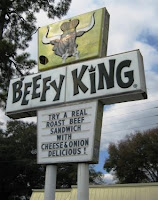 It was an overall fabulous, quirky, kitsch day. I met up with Paula (check out her blog or follow her on Twitter @vagablonde) and her mom, Pat. Paula and Keith (here's his blog or follow him on Twitter @heligypsy) have their home on wheels there until later this month. Keith's out in Australia on firefighter duty with a helicopter. Knowing what just happened over there, I felt a little guilty for having a beautiful, happy day. Let me finish telling you about it...

Beefy King: It's What's for Lunch
The three of us enjoyed a tasty (and admittedly, bad for the cholesterol) lunch at Beefy King (424 N. Bumby Ave.) in downtown Orlando. I had the reuben sandwich and onion rings (and passed on the orange milkshake, if I hit the gym that morning, it would've been a different story). It ain't fancy but kitsch, modest decor and yummy food. 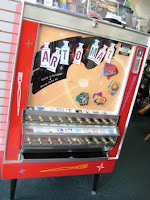 Art-o-mat: Vending Machine Art
Afterwards was a quest to find the Art-o-mat machine at Sam Flax (1401 E. Colonial). An art supply store isn't really a typical place for tourists, but the machine makes sense. In short, the Art-o-mat concept is taking vintage cigarette machines and turning them into something useful, in this case, it's a vending machine for art by independent artists from across the country. For $5 and change (for tax), get a token from the cashier and select what interests you.

I'm a big fan of folk art and the Mennello Museum of Folk Art (900 East Princeton Street) wasn't really what I expected but it was quaint and worth the $4 admission fee. Exhibits are compact which makes the collection look small. Works by Earl Cunningham are absolutely stunning and vibrant.

Urban Think! Gelato Time
We headed back downtown for gelato. The original place we intended to visit was gone but luckily, Urban Think! Bookstore (625 East Central Blvd.) had a sign promoting their gelato so we popped in there for a tart, creamy bit of the Italian treat.

And then it was time for Jim Henson's Fantastic World followed by a drive back to Southwest Florida. All done in a day, can you believe that?

during the quirky, kitsch day trip. I have Rob Smith, Jr. to thank for the recommendation on Beefy King.
florida travel me orlando travel quirky quirky-kitsch things to do in Florida