Flashback to My Biggest Dance: The Presidential Inauguration 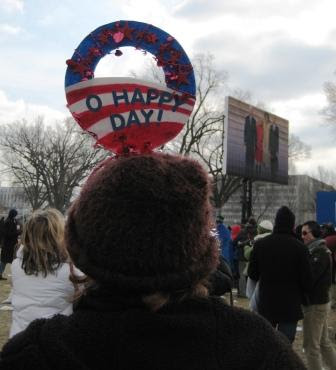 Note: This is a reprint of what I submitted to my employer’s company newsletter. Enjoy!

I never attended a high school prom yet, I was invited to the biggest dance of my lifetime, the Inauguration of President Barack Obama and Vice President Joe Biden. I was one of the nearly 2 million who attended the swearing-in ceremony on January 20, 2009, and witnessed history of the first African-American president. When I booked my travel to D.C. days following the November election, I underestimated the patriotic experience I would have.

Thanks to a friend whom I met during a 10-day humanitarian trip to Afghanistan in March 2006, she used her political connections to get us into parties, tickets into the swearing-in ceremony, and finally the Mid-Atlantic Ball, one of the official Presidential Inaugural balls where I stood shoulder-to-shoulder with Al Franken (Democratic Senate candidate in Minnesota and comedian) while watching The Dead perform.

Immediately stepping foot in D.C. the Saturday prior to Inauguration Day, I was swept up in the patriotic energy radiating from the residents and visitors. The city was decked out in red, white, and blue, and everywhere I turned there were signs related somehow to the inauguration, ranging from the Metro ticket with Obama’s portrait to Pepsi’s ads incorporating such terms as “hope” and “yes you can have it” with the soda’s new logo.

My whirlwind trip included a party for young political leaders at a swanky (and overpriced) D.C. club, party hosted by the Actor’s Equity Association which was attended by screen and television celebrities, the "We Are One: The Obama Inaugural Celebration at the Lincoln Memorial" concert broadcast on HBO, podcast taping of Slate’s Political Gabfest, the New York State Ball – in which New York Gov. David Paterson and Secretary of State Hillary Clinton attended, the swearing-in ceremony, and of course, an official ball in which Vice President & Mrs. Joe Biden and President & Mrs. Obama danced.

So what was it like being in D.C.? The energy was electric with an optimistic hope of change. It can best be summed up in a homemade sign someone made and brought to the Capitol lawn so others could their picture taken with it. “We Have Overcome,” it read.

Physically, the weekend was mentally and physically tiring and cold. I exercised patience when waiting to get into events. It took nearly three hours of standing in line alongside thousands of others to get into the swearing-in ceremony. I had plans on stopping by Rep. Tom Rooney’s (R-Fla.) office on the Monday prior to the inauguration but the wait to get in his building was about two hours so I passed. The Metro (subway/train) lines were at capacity on Inauguration Day and in order to control the crowd, the military regulated when passengers could board. The night of the ball was icy cold, especially wearing a gown and heels and having to walk a dozen or so blocks to and from the Metro. But being part of history made the whole experience worthwhile and I wouldn’t have changed a thing.
blog disclosure policy inauguration 2009 life me