February 13, 2009
The tight-knit community of Clarence Center, N.Y., a Buffalo suburb, propelled into the international spotlight because of Thursday night's Continental flight #3407 crash into a house. I grew up in this town (okay, I grew up in Lancaster but I was entirely educated in the Clarence school system).

Clarence Center: White Picket Fences
Clarence Center is what small-town America should be. Everyone knows each other because so-and-so's father went to school with what's-her-face's cousin ended up marrying you-know-who and started their own family. Graduating classes from 10+ years ago still congregate at favorite high school hangouts but this time they can legally drink and told the babysitter they'd be back by 10 p.m. (I'm kidding, no one drank in high school.) People look out for one another and are good to each other. Family values and family ties are important, strong, and tight. Bad things rarely happen here.

That's why I'm still shocked and stunned over last night's tragedy. Things like this don't happen in Clarence Center. 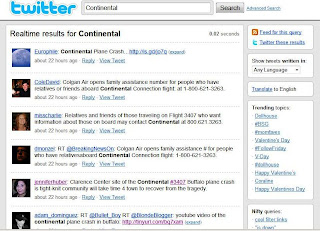 Facebook Reactions
Being the social media geek I am, I found out about the flight #3407 crash via Facebook. I started searching the Web for information but nothing was making sense so I flipped on CNN and started reading (and continue to read) accounts from friends and friends of friends who were providing Facebook updates as to what's happening.

I read and learned about: people hearing the crash; a mother and daughter running out of their house screaming and crying; at least one young woman who perished in the crash has eerie ties to Clarence, she graduated from the town's high school; and the disgusting odor hanging in the air.

Twitter & Buffalo Media
As for Twitter, I utilized it to primarily "outsource" my feelings about the crash. Other Twitterers used it to tweet breaking news or pass along information telephone numbers for families and residents.

I tried to use it to find new information and admit, I was disappointed in what I didn't find. But,
WNYMedia.net seemed to carry the Twitter torch for Buffalo media. They posted tweets from the scene and continues to do so. Perhaps the difference between utilizing Twitter is the old/traditional school of media vs. new school.

Down here in Southwest Florida, The News-Press and NBC 2 Fort Myers are excellent examples of local media utilizing Twitter. Not only do these outlets post story links but they interact with Twitter followers and demonstrate they have personality and a life beyond the media world.

Solid
But this post isn't how Western New York media outlets can catch the social media bullet train, it's about remembering those who perished and for those who's lives will be forever changed by this tragedy. Some believe good comes from everything and I can't imagine what good will come from this. Stronger community bond? I don't see how because the community bond is already solid with cement.