Day 2: My Trip to D.C. for the Inauguration - We Have Overcome

January 19, 2009
Yesterday was another exciting day. In the morning I headed down to the Newseum, the museum encapsulating decades of news in 6 floors, including a 9/11 exhibit and the FBI & crime (got to see the Unabomber's cabin). Very elaborate museum, emotional, intriguing, and fabulous.

I also ventured down to the Capitol where rehearsals for Tuesday's inauguration were taking place. After hearing how there going to be crowds of people this weekend, I had to ask, where was everyone? The Metro was pretty much quiet and streets empty. Granted, it was a Sunday, but a historic event anticipated to attract millions of people. 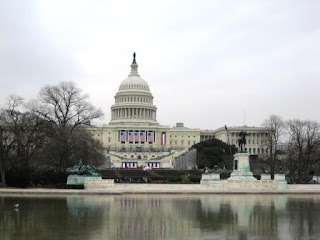 After meeting up with Cordelia and heading over to the "We Are One: The Obama Inaugural Celebration at the Lincoln Memorial" for the amazing concert (included Bruce Springsteen, U2, Beyonce, and James Taylor, and Mr. Obama and Mr. Biden were there), we found the crowds. Hundreds of thousands of people must have been jammed packed, spilling over to the Washington Monument. The good thing about being smushed in with people was the body heat, no worries about the cold. 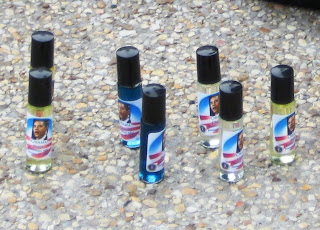 To and from the concert, we passed vendor after vendor selling everything from earrings to cologne (pictured) with Obama's face on it. I also saw a man holding a sign reading, "We Have Overcome." And that's when it occurred to me why this inauguration was so important and why there's such energy around it. It feels as though years, decades, maybe centuries, of oppression have finally been lifted. Bit by bit has been done over the years but with the election of Barack Obama, there's an energy of total freedom and I think that's why people are excited. I hope he can deliver on the country's expectations. 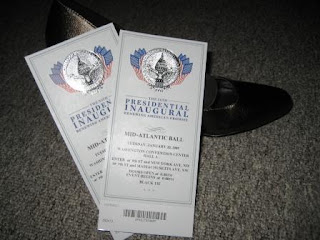 Last night was a party for the Democratic Leadership for the 21st Century at the K Street Lounge. It was one of those trying-to-be-swanky nightclubs where the bouncers made guests (who RSVP'd) wait outside and after midnight, the cover changed from free to $40 and served $9 Coronas. The music was decent, and there were loads of political insiders but difficult to talk with the music. I'm too old for loud music!

Today it's off to the Hill (Cordelia's teaching me the lingo) to find my Congressman's office (it's a holiday so I'm surprised the office told me they'd be open today and not open for inauguration day tomorrow) and later, attending the taping of the Slate Gabfest, and then some reception with the Beastie Boys, Jackson Browne, and other celebs. I'll try not to be starstruck :)

Here's a link to an article in the paper about my trip. And above is a copy of the tickets for Tuesday night's Mid-Atlantic Ball, one of the official balls. Did I mention The Dead will be performing?
inauguration 2009 life me politics washington dc travel