Dining at 157 Feet Above the Earth

December 08, 2008
I must say, the Dining in the Sky experience at the Seminole Casino Coconut Creek was something else and an experience I'll never forget. Here's a brief synopsis of what it was like: 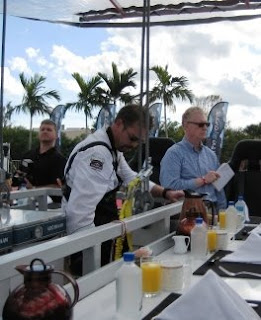 I arrived to the casino around 11 a.m. just when the 10 a.m. lift was descending. I didn't get a decent photo of it up in the air, I realize that would round out my photo album but how many other people can take photos from a dinner table 157 feet in the air? (Note: it has the ability to ascend to 180 feet; it so happens the lift I was on leveled off at 157 feet.)

I was one of the first to get buckled in. We were told to line up in pairs. Grrr. "Single rider here!"

I was seated then locked in with three clicks in a cushy leather seat. The guy, whom I was putting my life into his young hands, showed me how to recline the seat. Yeah, right. Like I was going to recline. Once up there, even though my seat had the capability of turning 180 degrees, I pretty much stayed in place, being slightly scared to death. One hundred fifty seven feet is high!

It looks as though the center of the table was seated first then others were seated on either side of me with the ends of the table filled last. Maybe that has something to do with balance. 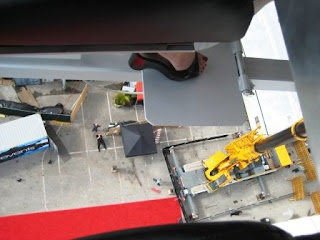 All this time, the culinary crew were filling the "galley" in the the middle of the table. Just enough room for five people - three chefs and the two owners, Mike and Taj. Once we were ready to go, the crew secured themselves to what I thought was thin line. They all wore harnesses.

Lots of media were around. Bill Geist from CBS was there (I assume his story ran on Sunday but haven't looked yet) interviewing folks but he didn't dine with us. Maybe he was going on the next lift, which was to have a five-course meal.

We had a gal from a Miami-area talk show on. Not sure who she was but she seemed nervous at first, too.

Once lift-off began, we ascended slowly and relatively smoothly. There was a slight jerkiness. Which is when I began thinking horrible thoughts, like the crane's cable was going to snap and we'd crash to a horribly painful death. Or that my seat would break off. While these terrible thoughts flashed by, I also thought how my Mother would tell the media, "I knew she shouldn't have done that." 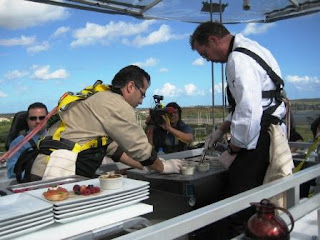 But alas, I lived to tell the tale. The fear eventually passed and I enjoyed sitting at the sky-high table, eating a lovely brunch (bagel, cream cheese, lox; fresh berries; oatmeal with caramelized topping - like creme brulee; fresh squeezed orange juice; fresh pastries), and was even a little bold and swiveled my chair 3 degrees. Yes, I admit I was scared about swiveling my chair the full 180 degrees, afraid it would spin off and drop, plunging me to my death.

I didn't drop my napkin, nor fork (but if I did, extras were brought on board) and no, there isn't a bathroom on board. Just raise your hand and within a minute (according to Taj) the contraption can be down in a minute.

Thank you Dinner in the Sky Events for the wonderful opportunity!
dining florida restaurants meetings in florida quirky things to do in Florida