Look Out Mexico, Here I Come

November 22, 2008
The last 10 days have been a whirlwind. Yesterday I thought my head was going to explode. Hosted seven members of the media last weekend and showed off Charlotte County. As soon as I said goodbye to them, I headed up north to Ponte Vedra Beach for Florida Encounter, a meeting planner show, to encourage planners to host meetings in the area. Meanwhile, I've been working on another itinerary for another media group visiting the weekend of Dec. 5, yes, the same weekend I'm going to the Keys for the Ladies Let's Go Fishing Seminar. And, found out this week I'll be assisting with a press conference the Tuesday I'm back in town for a big community announcement.

Rather than totally canceling the fishing weekend, I'm only participating in the educational day and will miss out on the actual fishing. I was hoping to sell a story about the experience but looks like I'll throw it up either on Associated Content or Suite101 (I do get paid via revenue share vs. upfront). *sigh* Reducing the trip sucks, but work calls, and in these times, I'm thankful to have a job.

My head has been overwhelmed with details, details, and more details. And lack of sleep. 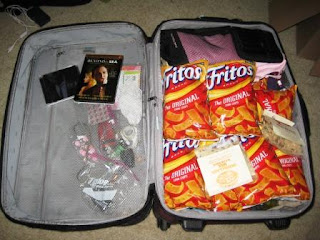 But yesterday at 5:30 when I left the office, I forgot about work and truly began getting excited for Mexico. I leave tomorrow at o'dark-thirty and land in Guadalajara before noon (that's if I don't get the red light).

I'm looking forward to seeing Barb, catching up with her, and seeing what adventures we can get into. I'm bringing her a few goodies, as you can see from the photo. Apparently, regular flavored Frito's aren't available in Mexico.

I'm feeling bad for my cat, I'm pretty sure she knows I'm going away (again) because the suitcase is packed and I've been trying to get things in order. She's been more "talkative" and needy today, wanting to be held. Yes, she's high maintenance but I still love her :) My friend Kashi will be looking after her and I know she'll be in good hands.

I'll try to post but will most likely be Twittering. Happy Thanksgiving! Perhaps my Turkey Day will be tequila and tacos.

By the way, have I told you how I'm heading to D.C. in January for Obama's Inauguration? I don't have tickets but travel is booked. Stay tuned as the trip develops. It'll be just me and five million of my new friends (at least that's what the media's reporting).
life Mexico2008