Weekend in Orlando: Mouseketeers and Geeks

October 05, 2008
As you know, last weekend was spent in Orlando visiting Disney and sandwiching in BlogOrlando3. I finally wrote my recap over at Associated Content simply called, "BlogOlrando 3 Unconference." Go check it out. I really thought BlogOrlando was a fab gathering and wish there was a group of creative types down here in Southwest Florida. I know Sarasota has a group of some sort, I just need to find them. 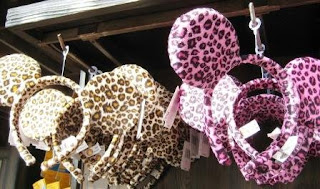 Now onto the Disney experience...Friday, Sept. 26 was the kickoff for the Epcot International Food & Wine Festival - yum! Being the opening night, it was a bit crowded. Disney usually does a good job in moving people through lines but it was a bit congested. What eased things was purchasing one of the Disney gift cards. I wore it on my wrist and it was easily accessible to pay for my food. Since it doesn't expire, I used it the following Sunday at Animal Kingdom. (Pictured below.)

Before hitting the food marketplace, I took a ride on Spaceship Earth. Fun! I did notice the odd look the Cast Member gave me when she asked, "How many?" and I replied, "Just me."

Traveling solo and experiencing life solo just doesn't phase me as abnormal and it amazes me how some businesses react as though I have three eyeballs when my answer is, "Just one." When Disney announced their 2009 free birthday admission program, someone said to me, "Disney's smart, no ones going to go to Disney by themselves." 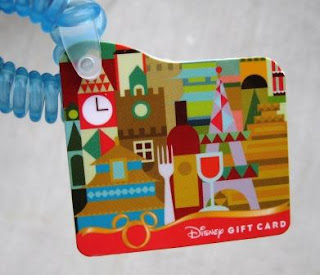 Well I would and I have! My birthday happens to fall on a Friday in 2009 and Disney is looking like an attractive way to celebrate (of course, if my single status changes, I'm not opposed to that). Coming soon is a blog post about a Web site geared toward singletons. But I digress about the Happiest Place on Earth...

I tasted Louisiana Cajun cuisine and will compare it to the real thing when I head to Lafayette the weekend of Oct. 16 (I really can't wait!). Louisiana also gave away Mardi Gras beads, little bottle of hot sauces and recipe cards. I also tasted New York State wines and my fave, sweet ice wine. I felt sorry for one of the Cast Members, she had trouble uncorking one of the bottles using a cheap, plastic corkscrew. She ended up breaking the cork and some how managed to get the rest out. I would think they'd have a monster opener, even I have a decent opener these days. But, the wait for my home-state was well worth the wait. 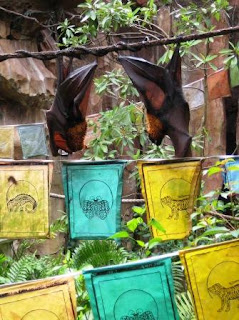 I headed to my hotel, the La Quinta in Eatonville (it was okay), and the next day was BlogOrlando.

Sunday, John Frost with The Disney Blog (note: sorry about AC's link-o-matic in the summary article I posted, the whole phrase was supposed to be linked but link-o-matic takes precedent) showed off Animal Kingdom through his eyes. I've been two times before but it was very special this time seeing the subtle things I've missed before. BlogOrlando organizer Josh Hallett with Hyku, and unconference participants Rob Williams with Orange Jack, and Felicia and Nik Wilets with Havana Lion came along, too. Felicia and I screamed our lungs out on Expedition Everest and I didn't remember Dinosaur being such a scary ride.

Did you know the oval shaped rocks in the Asian section are believed to bring fertility to those who rub them? Or the temple in front of the Expedition Everest ride mimics the shape of the mountain? (See below.) 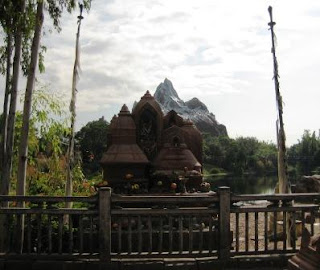 Disney's Animal Kingdom is an amazing place. Disney does everything with style, detail and care. It's an incredible zoo with attractions and rides around it. Of course, it's one of the Happiest Places on Earth, usually. I was mortified to hear a parent tell their child that he was so low, not even the devil could help me out. That's plain mean and it was the beginning of the day.

My next travels? St. Augustine for a meeting this week. The evening event is a visit to a wax museum where I'll be able to play in the paraffin. Can't wait!
blogging florida travel things to do in Florida traveling solo

Anonymous said…
'Twas a pleasure having you aboard for our little walk through Disney's Animal Kingdom. Glad you had a good time.
October 06, 2008 11:34 AM