Gettin' Figgy With It

September 01, 2008
Publix had figs on sale, buy one get one free this week. I had no idea what I was going to do with them, figs are kind of a strange fruit. Being from New York, the only thing I knew about figs was that they were in Fig Newtons (described by Nabisco as a "quirky, fig-filled cookie") and even then, I wasn't sure if they were a real fruit or some made up food like marshmallows. 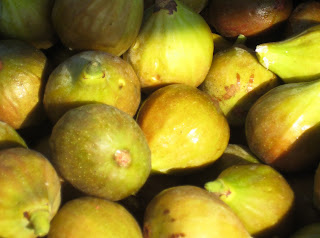 Moving down South, I've gotten up close and personal with fresh figs at the area farmers markets and occasionally the grocery stores. (Pictured above - figs at a farmers market in Savannah.) For the benefit of Yankees, you eat the whole fig, skin, seeds and all.

Yesterday I embarked on a new adventure, making fig preserves from a recipe I found over at Bayou Woman's blog. It's pretty basic, figs, lemons, sugar, water, a pinch of salt and lots of time. She recommends cooking the mixture for at least three hours, I did mine for four hours.

The photo below is what the mixture looks like after about 15 minutes or so. 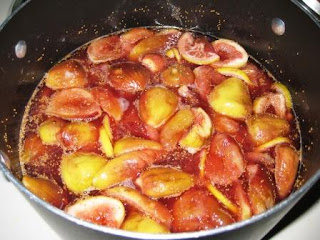 And below is what the mixture looks like after four hours of cooking. 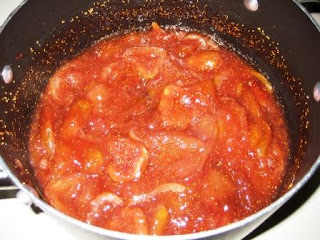 Tah, dah! The final product (below). I ended up with four and a half jars of fig preserves and I must admit, this is much tastier and sweeter than a Fig Newton! I was afraid the lemons would make it over powering but they didn't. And, I was afraid it was going to turn out runny but by keeping it on the stove, it cooks down and thickens up.

So what will I do with the fig preserves? Not sure, but it's pretty tasty on my toast and I saw a recipe on the Food Channel last week using fig preserves. The preserves were spread on the bottom of a raw pie crust (not in a pie pan) then chopped plums were placed on top along with some butter and sugar. The crust was washed with egg yolk (I think) and sprinkled with sugar, then baked.

If I need a dessert for something, perhaps I'll try that. Now, Bayou Woman is apparently in the heart of Hurricane Gustav. Send her some positive vibes that she and her family will be safe.
cooking recipes