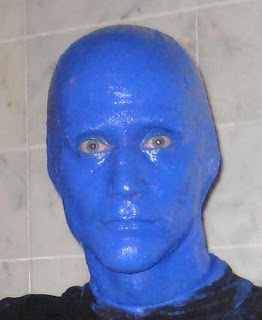 Monday night I got to see the Blue Man Group perform at the Venetian. While it was probably the most bizarre show I've ever seen (not that I've seen a lot of shows), it was also the most exhilarating.

The show features three men painted blue (they aren't the original Blue Men but have trained under them) who do the most bizarre acts, like painting with their mouths, eat Cap'n Crunch Cereal and make melodic music with PVC piping. One PVC piping instrument was like a giant nest in which each man was the center of a tangling of white plastic piping.

(Makes me wonder if anyone after seeing the Blue Man Group have shown up at Home Depot requesting piping to replicate their instruments.)

The men are supported by a rockin band. 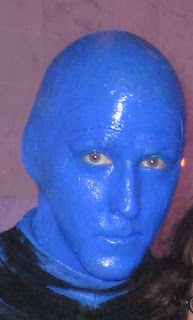 Audience participation makes the show, too and the men climb through the audience looking for participants. I got nervous when one came into our section, stood a few rows away and stared directly into my eyes. "Don't pick me, don't pick me," I wished and he didn't.

There's also a LOT of paper in this show. Paper (almost like toilet paper but not quite) is distributed at the beginning of the performance and guests are encouraged to wear it. At the end, rolls and rolls of it are draped over the crowd from the back of the theater and dragged to the stage. Wonder how many trees are sacrificed so the show can go on? Either way, the tree hugger in me still enjoyed the performance.

Throughout the two-hour show, the men never speak, but I got one to speak to me after the show. Couldn't tell if his accent was from New Zealand or South Africa. I complemented him on the show and he replied, "thank you very much." I don't think he was intimidating Elvis. 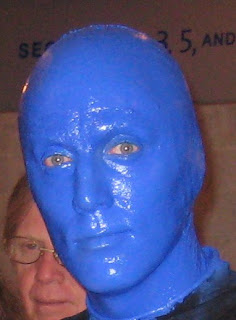 I'd definitely see the Blue Man Group again. Are they scheduled to visit Southwest Florida soon? Hmm, will have to check Ticketmaster.

Prior to the show, the restaurants of the Venetian (at the Shoppes at the Palazzo) and Restaurant Row, fed the delegation. Most restaurants had samples of from their luscious menus. My favorite was a sushi taco from Sushi Samba Strip. Two of my favorite foods were combined into a mini, light and crisp taco shell, sushi yellow fin and cilantro - yum!
entertainment las vegas travel