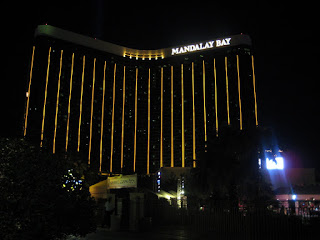 Sunday evening was the opening night for the 2008 Pow Wow and Las Vegas restaurants came out to play at Mandalay Bay. A big beach bash was held around Mandalay Bay's fabulous pool and the best restaurants kept the international and domestic delegates fed and hydrated with adult beverages.

Upon entering the pool area, delegates were given a single white glove. Was Michael Jackson making an appearance and we were to wear the glove in a, uh, tribute (?) to the Gloved One? No. The glove was to keep the drinking hand warm, the next stop was an ice bar with glasses carved from ice holding crisp and refreshing martinis. 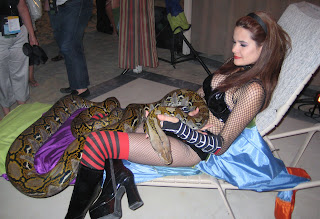 Pockets of entertainment were seeded around the pool, including the freak show area with the snake lady and some "freak" putting hooks and other pointy stuff in his face.

Seeing I flew in that day and was running on Eastern Time, I called it an early night and headed back to the hotel around 10 p.m.

So what happened the next night?