Where've I Been? In Atlanta 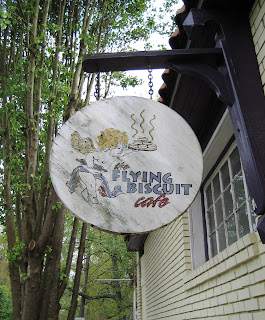 Spent the weekend in Atlanta for the Atlanta Travel Expo for work. Luckily, I was able to squeeze in a little personal time and catch up with friends and family in the area.

First was a visit to the Flying Biscuit Cafe in the funk-a-licious neighborhood of Candler Park (think Bohemian meets Dixie) with my Yellowstone pal Meg and her friend Patricia. We met 18 years ago in the park. Eighteen years! Where'd the time go???

I had the Love Cakes - black beans and cornmeal cakes topped with a green tomatilla salsa and sour cream. Of course a biscuit with cinnamon apple butter accompanies the dish. Yum! Love Cakes are served with a huge house salad. Dinner started off with friend green tomatoes and I enjoyed a mango mimosa - why not? 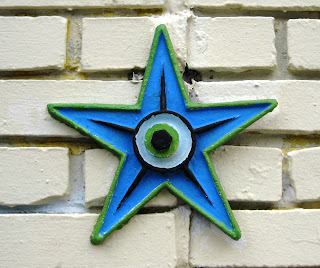 Breakfast is served all day and the menu has a healthy offering of vegetarian entrées. Coffee (well, an iced chai tea for me) followed a couple doors down at Dr. Bombay's Underwater Tea Party. We chatted and watched the world go by.

Friday and Saturday was the show. There were all sorts of fabulous seminars and I was able to squeeze one in, Aurthur and Pauline Frommer discussed bargain travel options (more on that another time). 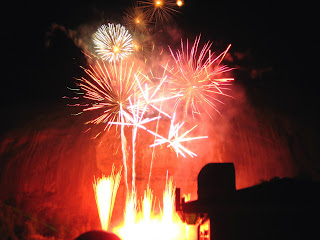 Saturday night following the show was a trip out to Stone Mountain Park for the laser light show. My buddy Rob (from my Sarasota days) was at the travel show and he suggested we head out there. We timed it perfectly and arrived just before the show.

Have you been? It was pretty cool. I've never been to a laser show and wasn't sure what to expect. I captured a few images, as you can see.

Sunday night I caught up with my cousin Tim. I suppose it's been four years since we've seen each other. 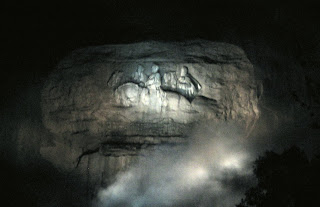 I'm back home until Wednesday when I head out to New Orleans to volunteer with Tourism Cares. We're cleaning up Louis Armstrong Park. Not quite sure what exactly I'll be doing, I'm just amazed that after three years, New Orleans still needs to clean up from a hurricane.

I hope to reporting from there later in the week. I'm planning to find a voodoo priestess...
georgia travel

Anonymous said…
Wow, cool menu items. I hope I can find their menu online and send it off to my son. He is a Chef and runs a restaurant in Tokyo. I won't write the name it might sound like I am plugging the place. Just proud of my son.
April 17, 2008 10:05 PM