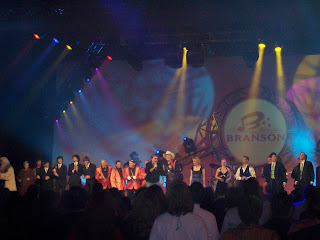 I was in Virginia Beach this past week attending the American Bus Association (ABA) Marketplace. It's probably one of my favorite organizations because everyone is friendly, welcoming and business gets done.

While there's a good amount of work (eventually I'll post about one of my favorite speakers during the event), there's fabulous fun.

During lunch on Tuesday, the folks of Branson, MO sponsored a musical extravaganza giving us a taste of what's coming on board this season. I have to admit, my perception of Branson is country and that doesn't do it for me. Boy, was I surprised with what the destination offers.

Carrie Tillis (Pam Tillis' younger sister) was the bubbly MC and performances included the Twelve Irish Tenors, Roy Rogers, Jr. & the High Riders, The Comets (as in, Bill Haley. BTW - these guys can still shake, rattle and roll) and many other talented performers. (Llamas were paraded through the Virginia Beach Convention Center ballroom, too.) 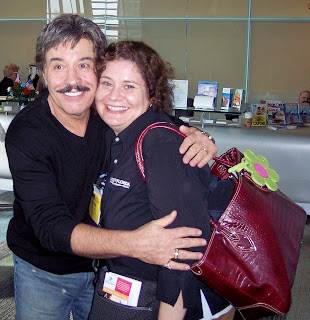 Tony Orlando (minus Dawn) was the final performer and he had attendees dancing in the aisles and women swooning. After his set, which included "Tie a Yellow Ribbon Round the Ole Oak Tree" and "Knock Three Times," the entire lineup performed a final song.

I was pumped for the afternoon and heading back to the educational sessions, I ran into some of the talent. A few others (all women) waited to see if Tony Orlando was coming out and sure enough, out he came.

What a wonderful person. He took the time to pose with the handful of us who waited for him even though he was due in a press conference.

So here I am with Mr. Tony Orlando (carrying the fab bag from Grandma and my bling-luggage tag from my sister Liz).

Stay tuned for more from my trip!
celebrity travel industry events us travel