January 31, 2008
I wanted to take a journey this year. A spiritual journey to discover what spirituality means to me and the rest of the world. I dreamed of accomplishing this by attending local houses of worship, or maybe finding a Bible study to crash. But guess what? I haven’t done anything. On my way to Sarasota earlier this month I envisioned myself stopping at the Hare Krishna temple in Gainesville. I MapQuested the directions, got off the exit, drove to the gates and CHICKENED OUT!

This is my problem. Fear. This is why I’m not a journalist or photojournalist by trade. I’m afraid to approach people in what I sometimes feel is a journalist way. This fear sometimes prevents me from seizing opportunity when it presents itself. Which is kind of what happened earlier this week.

The kind man sitting next to me on my 36-minute flight between Atlanta and Tallahassee noticed I was reading The Year of Living Biblically: One Man's Humble Quest to Follow the Bible as Literally as Possible

by A.J. Jacobs (I haven’t finished it but I highly recommend you go read it!). 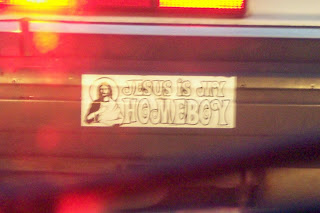 “Are you going to follow the Old Testament and write about it from a woman’s perspective?” The gentleman sitting next to me asked. He was a smaller man with silver hair and lovely blue, sparkling eyes. During the whole time I spoke to him, I swear his eyes twinkled like the stars in the sky. Don’t think I’ve ever seen that and perhaps I shouldn’t swear, considering the circumstances.

I smiled and paused. Something in me wanted to burst and confess I was on some spiritual journey myself but unsure how to go about it. Instead, I chickened out and replied, “I don’t think I could. Don’t think I’d be able to do much.”

We began chatting and I found out he lived in Portland, Ore. I told him about my trip last summer and he told me something I didn’t want to hear. He told me about four cool things I missed out on (No one likes to hear about things they missed out on during a vacation).
I then asked (jokingly), “Do you have any tattoos? It seemed like just about everyone in Portland has a tattoo.”

He laughed. I laughed. There was a lot of laughing during our conversation.

“No, I don’t even have a piercing,” he said while pointing to a corner of his nose. His eyes twinkled, again, and the action reminded me of Santa Claus.

Not sure where the conversation turned but he told me he spent 20 years as a Christian (Presbyterian) missionary in Ethiopia, beginning “well before I was born” until the early 1970s.

From there, I realized it was fate which seated us together. Maybe the forces of the Universe wanted us to talk (I usually don’t talk to people on flights and if I shared with you the conversations with the last two men I spoke with during long-haul trips, you'd definitely blush. Makes me wonder if I have a “freak” magnet in me).

I learned how he needed to ride a donkey to reach civilization (while in Ethiopia) and how he and his wife raised their six children there. I cried at one point because his stories were so touching (yup, sappy stories make me cry). These days he travels the globe still educating and will return to Ethiopia in March. As he put it, like in most countries, having silver hair makes you wise.

I shared with him my trip to Afghanistan. Having spoken to a group the day prior about my trip, I was energized about the experience. I shared with him my thoughts how our perceptions change about people when we know more about them but when we meet one on one as individuals, we (as humans) can communicate. Throw in a label (like when I met members of the Taliban), perception changes.

I felt a connection with this man, felt I had something in common.

Although I only spent 36 minutes talking to him, he made me appreciate my experiences more and has motivated me to do more. More of what, I’m still unsure.

If you’d like to see his photo, here it is. His name is Harold Kurtz, Doctor Harold Kurtz, to be exact (speaking during his visit to the area). His daughter Jean Kurtz (whom he is very proud of, along with his other five children) is a writer and continues work in Ethiopia.

I can’t believe I asked him if he had a tattoo. Where are my manners?
spiritual journey

Cordelia said…
Maybe questions like that help bring the conversations to a real level. They change its course and get people thinking differently. Thanks for sharing.
February 01, 2008 5:42 PM