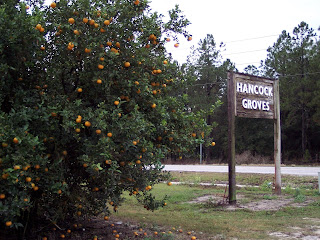 Last weekend when I traveled to Sarasota, I stopped at Hancock Groves in Dade City (along I-75) for some Florida citrus.

Since I'm not a native Floridian, it's not odd for me to purchase it. If I were a native Floridian, it would be odd. I was speaking to someone from Florida's Department of Citrus last year and she said Floridians purchase the least amount of Florida citrus. Perhaps it's like living near Niagara Falls, it's always going to be there so why visit it? Anyway...

I ended up with a quarter bushel of pink grapefruit, navel oranges and tangelos. The bag was full, so I thought, until the clerk helped me stuff three or four more oranges in there.

Have I told you how much I love Florida citrus???

After getting what I call, "the Florida Sunshine," home, I thought, "there's no way I can eat all this before it spoils." Thank goodness for the Internet! 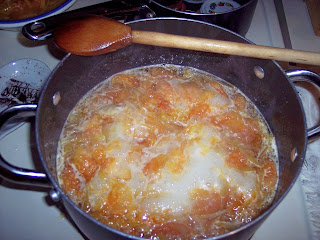 I searched for EASY marmalade recipes. I emphasize easy because there are some pretty complicated ones out there, ones that take TWO days to make. Also, most of the recipes I found contain lemon. Why lemon? Had to make a special run to the grocery store for that.

First I made grapefruit marmalade and even included the rind (to make it authentic). I used this "Blushing Grapefruit Marmalade Recipe" over at YumYum.com because it was quick and relatively easy. I imagine boiling the rind with baking soda helps break down the rind rather than letting it set over night (as most recipes suggested).

Next was my injury (read here if you haven't already) and finally was orange marmalade. I found the recipe over at PickYourOwn.org. I love this site. It helps me locate u-pick places in the Tallahassee area, has canning recipes and offers tips about canning. 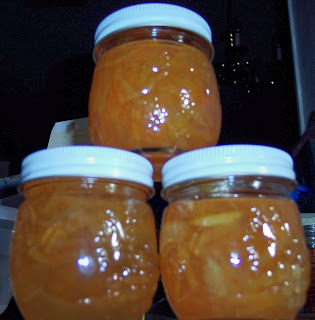 Let me tell ya, making marmalade is hard! Suppose hard isn't the word, just time consuming. I probably spent 8 hours making both batches. With the grapefruit, I had to slice out the white pith from the rind then slice into narrow strips.

And, the orange came out a little runny but the recipe said it won't set for another two weeks. I hope so! Otherwise I just made a nice topping for ice cream. Didn't include the orange rinds in this one, didn't have the patience.

What am I going to do with it all? Not sure. I have about twenty jars of the stuff, suppose I'll have them as hostess gifts (I'm heading to Texas next week and seeing a friend from Yellowstone, she'll appreciate it). They should be okay for 12 to 18 months.

Hungry for more foods from the Sunshine State? Read my article, "Savoring the Flavor of Your Florida Vacation."
cooking florida travel

Matthew said…
I was never that big a fan of marmalade. But I sure miss Florida citrus. I can't wait to go home and have some real grapefruit (they're extremely expensive in China).
January 20, 2008 10:06 PM

Anonymous said…
I got the blues thinking of the future, so I left off and made some marmalade. It's amazing how it cheers one up to shred oranges and scrub the floor. ~D.H. Lawrence
February 26, 2008 1:26 PM