Bill Richardson Bows Out of Presidential Race: What a Shame

January 14, 2008
Democrat Bill Richardson dropped out of the run to become the next President of the United States and that's a shame. Of the Democratic presidential candidates, he seemed to be the most qualified with his diverse experience but unfortunately, most of America didn't see this and supported other candidates. I have my philosophy on this and am ashamed I'll be saying this but, he doesn't have the "look" to be a United States President.

I know I could be ruffling some feathers but let's think back to the first televised Presidential debate in 1960 between Richard Nixon and John F. Kennedy. Kennedy won the American public over because of his handsome "look." 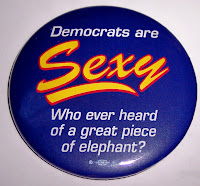 Nearly 50 years later here we are in the 21st century and we Americans, self included, are more superficial than ever. We're obsessed with celebrities. Everyone's looking for their 15 minutes of fame (look at the continued interest in reality shows) and we seem to care more about the mundane antics of Britney, Lindsey and Paris than what's happening in our world or even in our neighborhoods. I was disgusted to find Britney Spears the breaking story on news programs last week. I feel sorry for the poor girl but let’s get real!

Or, look at the media coverage around Anna Nicole Smith’s death. A year later, the media’s still talking about Anna Nicole’s daughter. To top it off, we're constantly bombarded with media messages telling us what's attractive and Richardson doesn't fit that mold, thankfully so.

If you listened to Richardson during the debates, you'd know he has the most experience and qualities to become President. He seemed no-nonsense, straight to the point and smart. While competence, confidence and experience are ideal traits to have in a President, these are non-tangibles, voters couldn't see these.

Instead, voters are supporting Hillary Clinton, Barack Obama and John Edwards because they have more glitz, shine and celebrity-like qualities about them. Even Rush Limbaugh knows Edwards has something, he's dubbed him "The Breck Girl."

I admit to not paying attention to Richardson and my bad.

To my knowledge, Richardson hasn't endorsed a candidate. This gal's thinking maybe he'll show up on the Democratic Party ticket as VP. Let's hope.

And who am I casting my vote for in the Florida Primary? You'd be surprised. While I admit to being a card-carrying member of the Hillary Rodham Clinton Fan Club (acquired while she was the First Lady), I'm supporting the white male..."The Breck Girl"... John Edwards. Yup, The Breck Girl has my support, but there’s more to him than his sleek, shiny hair.

Of course, I could write-in my fav candidate, President Jimmy Carter.
politics

Matthew said…
The US isn't the only superficial country. I'm certain it would happen in China if they was any sort of democratic process. Instead, the leaders here are some of the homeliest the country has to offer.

As for Richardson, I don't think enough people really recognize him--I don't remember seeing or hearing him too often when I was still in the states. There's also very little about him in the papers (the uncensored ones I can get online anyway).
January 16, 2008 11:22 PM

jhuber7672 said…
Suppose you're right. Cuba was superficial when I was there in Dec. 2004. I mean, people had pimped out cars with things lighting up on them and loads of bling, yet they were living in slums.