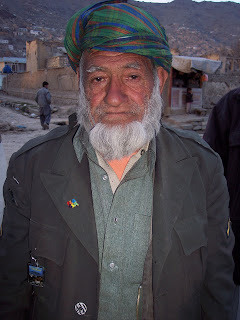 I know, I know, I should have spent Sunday morning getting caught up on blogging and emails but when I saw that movies prior to noon cost $4, I ran out to see "The Kite Runner." I've read mixed reviews about the acting but I thought it was superb. The movie is almost as dark as the book but not quite. Still, it's an excellent movie almost staying true to the book. While little of the film was shot in Kabul, it evoked memories of the trip (here's the blog I kept, in case you missed it) and experience. I need to find some time, soon, to sit and write about the people and the experience some more, before the memories fade away.

Anyway, was happy to see a familiar face in the movie (the man in this photo). The shopkeeper across from the guesthouse has a bit part in the movie. He was also in the movie "Osama" and had a significant role (I haven't seen that movie yet).

All this talk of Afghanistan reminds me, I just received an email from Global Exchange, the group I traveled to Kabul with. They have several Reality Tours (which is what I participated in when I went to Afghanistan) coming up focusing on women's issues. Check them out.

But before you do, I just realized this will probably be my last post in 2007 so...

Just want to say thank you to everyone who's read, lurked and commented on this blog. Expect "different" things in 2008. It should be a fabulous year! Happy New Year!

Global Exchange's tours provide insight into women's perspectives on their lives and the futures of their countries. Upcoming women-focused Global Exchange Reality Tours include:

March 1 - 11, 2008
Women's Rights and Leadership Venezuela
In Venezuela, women's advances have been dramatic under the government of President Hugo Chavez. The recently formed Women's Bank is empowering women to create and manage their own development projects through micro-credits and workshops; new laws require political parties to field 50% female and 50% male candidates; and the country is one of only a few in the hemisphere that acknowledges violence and discrimination against women as obstacles to the development of democracy.

March 3 - 12, 2008
Afghanistan Women's Delegation (this is the trip I took)
Join Global Exchange, in partnership with Afghans4Tomorrow on a women's delegation to Kabul, Afghanistan and bear witness to the self-generated transformation of women's roles in Afghan society. This trip provides the opportunity to gain first-hand insight into Afghan women's perspectives on their lives and the future of their country. In addition to meeting with women from all sectors of Afghan society, the delegation will have an opportunity to examine many other aspects of reconstruction including education, de-mining, arts, culture, and the media.

March 3 - 17, 2008
India: Women's Visions Confronting Globalization
Travel through northern India on this new tour that includes visits to highly successful people-based economic projects as well as stunning architectural and historical sites. Your exposure to sophisticated urban life to the dynamism of ordinary Indians in rural areas will give you a much more complete picture of this complex country than most Western stereotypes suggest.

August 6 - 18, 2008
South Africa: Women Building a Nation
This Reality Tour is centered on South African Women's Day, August 9th, which is the day when the Defiance Campaigns against apartheid began in the 1950s. Global Exchange trip participants attend rallies and celebrations, hear choirs and speeches and - most importantly - share the universal concerns of South African women for dignity, the full development of their talents and potentials, and economic self-sufficiency.

For a full list of Global Exchange Reality Tours (there's a trip planned to North Korea in 2008, that would be really cool), Click Here.
international travel life