Arrr! Pirates on My Mind 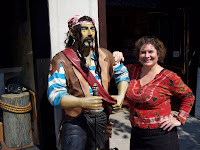 Ahoy, me mateys! My weekend of labor has been most enjoyable, albeit it's winding down. Friday night was a writing frenzy with Saturday and Sunday devoted to cleansing my apartment: everything from removing the icky spider webs from the corners to dusting the base boards - yes, a rare moment of cleaning for me.

I did take time out to see "Pirates of the Caribbean: At World's End" over at the buck twenty-five theatre. I'd seen the first one but not the second, which is probably why I was lost through most of the third flick. But, Johnny Depp as Jack Sparrow was delicious as usual so I'm not too disappointed.

Being in the pirate mood, I made an impulse purchase at Tallahassee's Avon store and purchased a pair of silver skull and crossbones earrings. I later learned about the 2007 Tybee Island Pirate Fest Oct. 5 & 6, 2007 (over by Savannah, for you Georgia-geographically-challenged-landlubbers). I'd loooove to go if I can wrangle up any other swashbucklers to join me. Anyone? Anyone?

And all this talk of pirates reminds me to remind you, my loyal reader(s) about Sept. 19 being International Talk Like a Pirate Day. It's not too late for you to practice the basic "A's" of pirate-talk. Argh!