Pulling Off One Big Surprise...Priceless 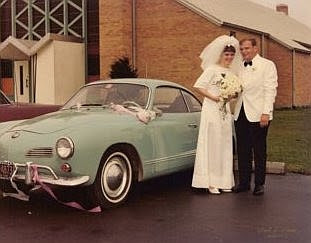 I'm in Buffalo this weekend, primarily for a cousin's wedding, so my parents thought. It happens to be the weekend of my parent's 40th wedding anniversary and my cousin's wedding was Friday.

Since March or so, we four siblings have been scheming on what to do to mark the anniversary. Thankfully one of us inherited our Mother's entertainment-Martha Stewart gene - that would be Lizzy (who somehow managed to acquire the fashion and style gene).

Being the oldest child, I felt I should have had a bigger role in the planning but being in Florida, I didn't feel I could contribute much to the planning. Lizzy and her husband Mike were the anchors of the party and we mostly communicated via email and frequent phone calls as the date approached.

About 75 people, including children, were in on the surprise and no one slipped up in accidentally spilling the beans to them.

On the day of the surprise, the folks were to be at Lizzy's for dinner at 5 p.m. An hour prior, the guests arrived and five people/couples were designated to hold up the following signs as they pulled into the driveway (yes, we ripped off the MasterCard "Priceless" campaign):

And the rest of the guests held up signs reading: Priceless.

Were they surprised? To use one of my father's favorite phrases, "You bet!"

As for the photo in this post, it was the inspiration for the "Priceless" theme. Lizzy had snuck into the parent's attic a few months ago and took their photo album. One of my tasks on Friday was to run to FedEx Kinko's and have it enlarged. Not so easy. Notice the photographer's name in the lower right hand corner? "It's copyrighted. We can't reproduce it without permission of the photographer."

While I was figuring out what to do, another customer came in asking to have a photo copied and she was told the same thing. She turned around and walked out. I was going to find a solution.

I Googled his name (thank goodness for technology and loss of privacy) and found him associated with Henry's Candy & Gifts. I called the number hoping it was the same person and I eventually found him!

Short of it, I had to run out to the retired photographer's house to have him sign a release on the photo. Thankfully my friend Val, who was my chauffeur that day, didn't mind. Turns out he retired a little more than two years ago and he finds this whole business of signing releases silly on FedEx Kinko's part. I took a photo of his house with the sign stating who he was, in case the copy clerk didn't believe me.

I returned to the shop and a different person helped us. I told her how we got the release and she never asked to see it!!!! She made the copies and I went to hand her the release but she said I needed to keep it.

I was a bit ticked they didn't ask to see the release and I was tempted to find the little man who helped me and wave the release in his face but I walked away knowing what I had done was priceless.

Note: Images from the party to be posted later in the week.
family me priceless

Anonymous said…
The couple in the picture are geeks, but that car...oh...that car...do you have that car?

jhuber7672 said…
I've had quite a few requests for the car. Not sure what happened to it.

I wish my parents had made it to the big 4-oh. Dad passing twisted me up around the trailer hitch.

Anonymous said…
That was my very FAVORITE car!A '62 Kharman Ghia(VW)Long since gone. Traded in for a new 69 VW Beetle.It (Kharman) was one of the "small cars" - which is a statement only our family will understand!!
August 30, 2007 6:11 PM