Got Snakes? Boy! I Miss Working in the Parks! 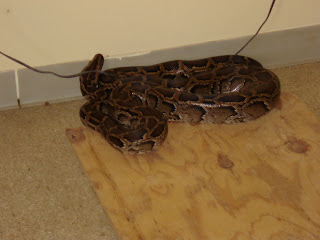 If you've been keeping up on Everglades National Park news lately, you'll know pythons are an issue. They aren't native to the park but growing in population. South Florida residents are apparently adopting python baby snakes as pets then releasing them into the Everglades when they grow too big.

I can picture it, a family of four going to the pet store, picking up a tan and brown snake, hugging it and saying, "oh, isn't he so cute? Mom, can't I take him home?" Little pythons grow into big pythons, don't people realize this? Do they think they can turn them into belts when they outgrow their aquarium?

Today, the New York Times ran an article about the discarded beasts, making me slightly homesick for the 'glades, slightly I emphasize - it's summer, which means mosquito season, all 47 species. Anyway...

Peter (the ex) emailed this photo of a python found in an employee dorm at Flamingo. Now, potential employees don't be getting nervous, the employee found the snake on the side of the road (that 38-mile stretch between the park's entrance and Flamingo) and decided it'd make a nice pet. (Flamingo is pretty isolated and can get lonely; I can see where a cold reptile can look like something warm to cuddle up to).

Well, the 10 foot-long python has been confiscated (its girth was 6 inches) by the National Park Service extraordinaries. If need be, they could have used force if it got unruly (a bullet to the snake's head because it's not native to the park) . Luckily (or unluckily) the snake cooperated. Not sure of its fate but from reading the New York Times article, I'm guessing he's already been dissected.
everglades national park

RC said…
yikes...that's scary for sure.

just visited the glades this past weekend for the first time and LOVED it.