June 24, 2007
It's been a while since I've consistently visited the gym. After vacation this month, I popped in for a day but then had to hit the road again. Think I can count the times on one hand how many times I've been. But I did go twice this week.

Today I got on the dreaded scale. It's been a month of eating horribly without consistent exercise. To my delight, I've lost 10 pounds since March! Okay, I know that doesn't seem like a lot, especially after four months, but that's at least 10 pounds of fat converted to muscle. My legs have some nice definition and the arms are getting there. It's just my middle which doesn't seem to wanna do anything. 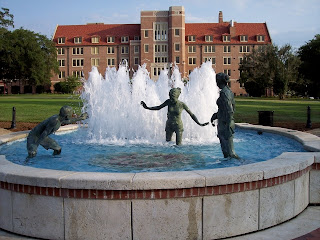 Was good with the Pilate's DVD but the player broke (I go through a DVD player every year) and it runs too slow on my PC. But, I will get back to doing that.

I've reached 20% of my weight loss goal. I know I'll never be a size 8 and I'm comfortable with that. (BTW - Don't think I was EVER a size 8 and am pretty sure I bypassed it when growing up; plus, if I ever reached that size, told myself I'd get a belly ring and not sure if that's me...). Just want to transform myself and be the best I can. I also have a nice base tan going, too.

I'm back to thinking positive again...

Read my Tallahassee blog to see what I did today.
life