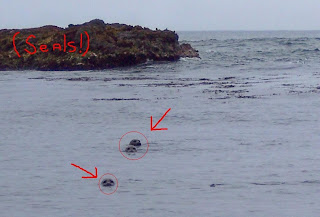 I now understand why my father didn't like to stop and sight see along the way on our spring drives to the Sunshine State. I didn't dilly-dally too much today, but spent about 14 hours in the car. Yup, I underestimated the distance between tonight's hotel and last night's. Plus, I took a detour through Ashland (for a wine tasting) and Medford (I noticed people drive the speed limits around here. Safe, cautious drivers).

Before I left the state park this morning, I went to see the seals again. They weren't lounging on the rocks but had moved to another area and were fishing for breakfast. I walked down to the tidal pools for a closer look. Their heads bobbed up and down and every so often, they'd dive and splash their fins. 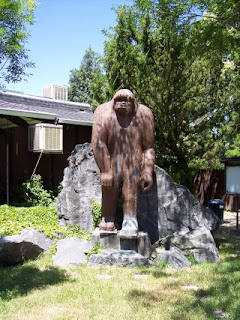 As I walked closer to the water, one took notice and popped his head up. Like the deer, he seemed as though he was checking me out. We made eye contact, me curious about him, him probably thinking, "oh, another tourist." He disappeared and re-appeared with two friends. The three of them swam closer to get a better look of me. I just stood on the rocks, trying not to step on the exposed sea critters. Closer and closer then in unison, the three dove under the water and dispersed, each popping up in different locations.

I then hit the road. More cool stuff to see...

I lost count, but think I went through six mountain passes, most with hairpin turns every mile or so. The scenery has been incredible. I love the rocky coast meeting the Pacific Ocean, with a bit of sandy beach. Saw a house for sale on a cliff overlooking the Pacific for $750k.

I realized I've become the type of tourist I loathed in my younger days. The type who just gets out of the car, takes a picture and jumps back in without taking the time to explore and appreciate. I now realize there is still appreciation but EVERYTHING is so new and different, I want to experience as much as I can.

Drove through Avenue of the Giants, more fabu TALL trees then reached a place with Big Foot stuff all over the place (I'm too tired to look up the name). But, apparently, it was the area where Big Foot was captured on film (but I thought that was fake???). There's a scenic highway and it's called "The Bigfoot Scenic Highway." I stopped at the town's visitors center and asked if the highway was mountain driving. "Oh, no, it's flat and you don't have to go over any passes." Guess things are up to interpretation, because I went over two mountain passes.

The hotel called around 8 p.m. to make sure I was still planning on staying. YES! I hadn't planned on arriving past 8, but that's what happened. 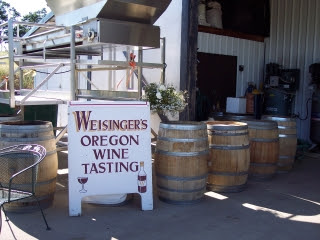 I stopped for gas three times today, 2 fill-ups and one, "oh, it's a mountain pass, I better top off." The last was in Oregon at a Chevron and I went to pump my own gas but the attendant said it's the law that all gas stations are full service. Is that for real or was he pulling my leg? Either way, it was nice of him to do that and wash my windows, all for a cost cheaper than in Tallahassee.

And tonight, I'm in a really groovy, funky hotel in McMinnville. Doors lock at 11 p.m. and I pulled in at 10:09 p.m. There's a microbrewery and pub attached and all the patrons were out around 10 p.m. Lots of happy, drunk people on the street, maybe that's where Oregon gets its happy-go-lucky reputation - from microbrews and good wine! 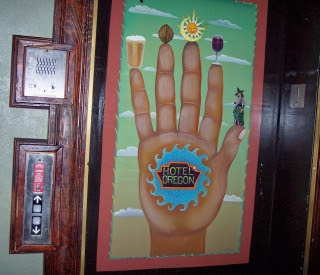 The hotel is awesome, phrases written EVERYWHERE on the walls, colorful, funky paintings, elevator doors painted differently. Each sleeping room has its own name. Downside, had to park two blocks away and the bathroom is across the hall, but for 50 bucks, it's well worth it.

Calling it a night (it's about midnight), another big day tomorrow - more wine to taste (and maybe some beer) and sights to see. In Portland tomorrow night and the night after. At least I'm going to sleep in until 8 a.m.
S2S2007 traveling solo