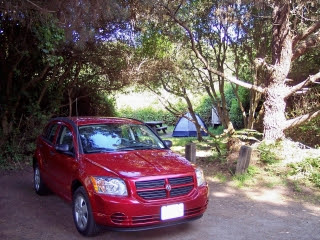 Yesterday ended watching the sunset into the Pacific Ocean. It was the first time I've seen it. I was at Mackerricher State Park, sitting on a big rock at the ridge of a sand dune. While the sun made its descent into the Ocean, instinct told me to turn around and I did.

Watching me about 25 feet away was a young white tail buck. His amber fur glistened with the sun's orange rays. His big, curious brown eyes gave me the look over, as though checking me out to see if I were "okay." He ran down the opposite side of the dune to an area being restored with vegetation and met up with two other young bucks. A rider atop a horse came through and chased the deer away.

The wind blew harder and the air grew more crisp. But man, I love the smell of salty, sea air. I also love what it does to my hair, creates big, "sea," loopy curls (think Shirley Temple). That was yesterday. While in San Francisco, my hair was frizzy like a Q-Tip, today it's flat. Anyway... 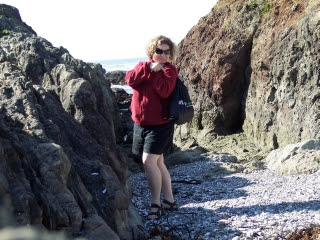 Yesterday made my way back to Sonoma. Stopped at the Rosie the Riveter National Memorial - I didn't know there was one - then onward to the Jack London State Historical Park. I didn't realize how young he was when he died - 40. I'm three years away from 40 and haven't accomplished even a FRACTION of what he has. More than just the writing, but the family and his home. (If you're unfamiliar with who Jack London his, this is the "wolves" section of the blog post - he wrote "Whitefang," among other stories involving wolves).

Mackerricher State Park was next, just north of the town of Ft. Bragg on California's coast. I got to pick out my camping spot - yippee! But have to admit, being the day after, I realize why I haven't camped in more than 10 years :)

It took maybe 20 minutes to "set up camp" - which was basically popping the tent up. I then went to look for my beloved seals. And I found them, at least a dozen round "sausage links" lying lazily on the rocks with the crashing waves of the Pacific around them. They seemed unfazed by this and occasionally flapped a tail fin or two. 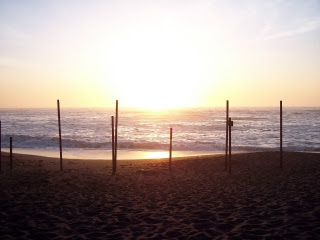 Sunset followed then bed by 9 p.m.-ish. Then I began to get creeped out. I started hearing noises in the bushes around me and it began getting cold. I imagined the tent being shaked, like in "The Blair Witch Project," which I think is the scariest movie ever. Tried thinking happy thoughts and went to sleep. Awoke after thinking I slept several hours at 12:30 p.m. I dreamt that a small tremor went through the campground - I felt it in my dream, not sure if it were real.

I was COLD! Thought about getting in the car but the thought of lugging my stuff and going outside seemed worse than bearing through the rest of the night. After it all, I did get a decent night of sleep. Which leads to the next post...
S2S2007 travel traveling solo

Anonymous said…
Was that the first time you've ever seen the Pacific from the west coast of the US? I remember seeing it from Japan...Toshi took us to the beach, it was beautiful!
Kathy
May 30, 2007 8:48 PM

jhuber7672 said…
I've actually seen the Pacific about 10 years ago from Orange County but first time I've seen a sunset. I think of our visit to the Pacific while in Hamamatsu - good times! I still have the rock from there, too.
June 01, 2007 9:05 AM