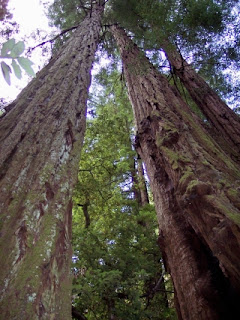 Yesterday was awesome. In true San Francisco weather, conditions were cold and foggy, a light mist dampened the morning (and frizzed the hair). Met up with Extranomical Tours at the Park Fifty Hotel near the Powell BART Station for a tour of Muir Woods National Monument (for tree hugging) and a trip to the Sonoma wine country (to sip some wine). I liked the size, there were 11 of us in a white van, not one of the obnoxiously painted vehicles. 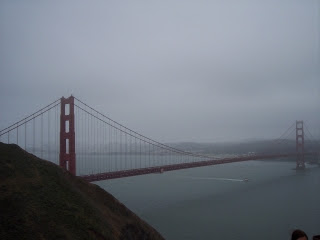 Once we crossed over the Golden Gate Bridge, the fog lifted. The walk at Muir Woods was still chilly but comfortable. I walked the easy, paved trail, straining my neck to look up in awe at the redwoods. Redwood Creek meanders along the trail, full of rounded river rocks. Not much was flowing through the creek, though. We only had an hour before heading to Sonoma.

The weather was gorgeous, probably upper 70s and sunny.

I guess Sonoma was what I expected. Wineries sprinkled throughout the rolling hillside (I know, cliche phrase). The tour included stops at three wineries and our guide chose a nice mix, visiting small, medium and large wineries. Unfortunately, I really didn't like most of the wine (the area is known for reds and up until recently, my body can't tolerate reds). 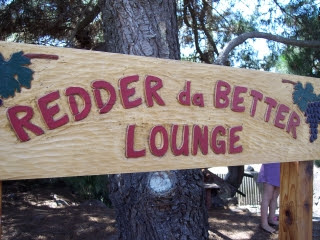 Highlights were a stop at Homewood Winery, produces 3,000 cases annually and a real intimate setting. Viansa was like stepping into Tuscany (so I'm told). Located on a hillside, the vineyards rolled down each side and the view looks over the Sonoma countryside. None of its wine is distributed through wholesalers or retailers, it relies on winery tours and wine club membership to sell its product.

Cline Cellars has beautiful roses around the vineyards, which is an indicator how well conditions are for the grapevines. Interestingly, while the wine is the primary draw, an aviary and the California Missions Museum is on site. On display are miniature models of California's missions built for the 1939 World's Fair.

Upon returning back to the city, the fog swirled back in, but didn't hide the Golden Gate Bridge for the obligatory stop for the Kodak Moment.

Of course, since I was the odd-ball person traveling alone (everyone else were paired up or in threes), the conversation of traveling solo came up. The husband-wife couple brought it up, asking if I was used to traveling on my own because I just seem to get up and go. I explained my philosophy on traveling solo. 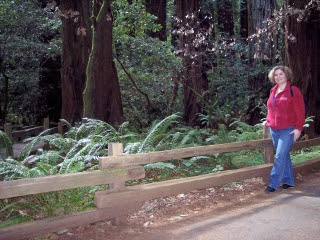 "That's great!" was their response.

Did see the sea lions at Pier 39 upon returning, at Fisherman's Wharf. Hundreds of their sausage-like bodies lounged and played on floating docks built specifically for them. As the Extranomical guide said, "they're a bit like exhibitionists," because of the tourist stands built at the pier to watch the sea mammals. 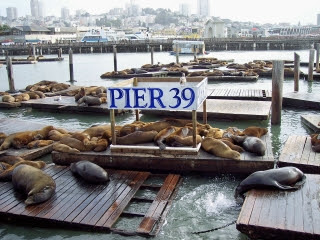 Also took a walk through China Town and upon returning to my hotel, I realized it earns an 8 out of 10 on the scary meter for location. The property itself is perfect but location the beggars are a bit aggressive.

I'm torn what to do today. It shouldn't take me that long to get to my next destination - Mackerricher State Park. I'm torn between Pt. Reyes National Seashore and heading back to Sonoma for the Jack London and Robert Louis Stevenson State Parks.
S2S2007 traveling solo us travel