Delta Doesn't Like it When I Go on Vacation

May 27, 2007
My trip began today with getting up at 3:30 a.m. EST for a 6:00 a.m. flight out of Tally. What happened in Atlanta? Maintenance delay, departed more than an hour later to Salt Lake, which meant I missed my connection to Oakland, CA. Now, I didn't book that, I originally had a direct between ATL and OAK, but Delta apparently doesn't offer that service any more.

The gate agent made an announcement that passengers can go to the re-route desk and re-routed via Cincinnati or alternative airports.

I tried to reroute to San Francisco but was told I had to fly the same route as my bags, "FAA regulation."

"Look," I told the Delta 'special persons guy' (I'm a silver medallion, not a super special person but at least a somewhat special person), "we both know the bags don't always fly on the same plane as the passenger."

"Delta has a 98% rate of getting luggage on time," I was told. He then made some phone calls and said I could reroute if I paid for it because it was a volunteer re-routing! Hmm, did I choose to depart later? No. Did I even choose to book via Salt Lake? No. If I knew the flight would no longer be offered, I would have booked to fly into San Francisco. I didn't want to push the issue, the last thing I wanted was to be hauled off into some questioning room and missing another flight. 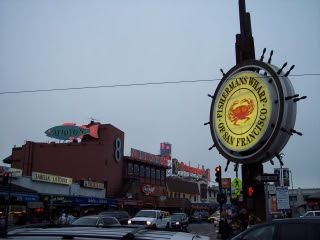 Anyway, I got to Salt Lake, sat next to a 48-year-old divorced, psychiatrist who's Indian and on his way to meet the 8th woman he's met online in his quest for love (whole other story unto its own and I learned more than I wanted).

I had about 3 hours to kill and remembered the Mormon Temple Square offers tours from the airport. I had printed out my "route interrupted" voucher and meal voucher and headed out past security. I stopped the three young TSA officers to make sure I'd be able to get back through. One replied, "oh, you're going to be spending more time with us."

Wasn't sure if he was referring to the Mormon people or what. He then pointed out the "SSSS" code on my boarding pass. Remember this post? He said I'd be better off going through security than trying to board with the SSSS code. He said I'd been flagged to be pulled aside for searching once my boarding pass is scanned at the gate. Another guy said, "we have a puffer machine that takes care of everything."

I replied I was already familiar with the puffer machine and hate being the SSSS girl. Methinks this was the revenge of the Atlanta Delta agent.

Anyway, didn't make it to Temple Square. Returned through security and I really have to wonder how safe things are. The TSA agent checking boarding passes didn't understand the trip interruption voucher - which is a boarding pass, it just looks different. He kept riffling through my papers and I kept telling him, "it's on the top."

He replied it was "okay" not to go through the extra security.

Needless to say, security was fine, no puffer machine and I didn't get flagged boarding the plane. Landed in OAK at 3:30 p.m. and settled at my hotel in the ghetto. It seems to be in a shady area but the hotel is actually very nice. I had reserved the cheapest vehicle possible but have some boat of a thing. Good thing is, I can actually sleep in the back if I put the seats down. So Monday night, maybe that's we're I'll be spending the night. We'll see. 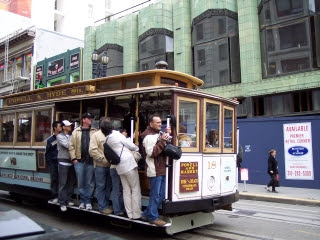 Headed to San Francisco this evening via BART - Bay Area Rapid Transit. It's soooo cold and I wasn't prepared. But, enjoyed a heaping cup of seafood (crab, squid and shrimp - mmmm!) and piping hot clam chowder at Fisherman's Wharf and road a trolley. I'm sure I'm not the only one, but every time I saw a street car, kept thinking of Rice-a-Roni...

Matthew said…
What an adventure. I've never flown Delta. I've had some pretty bad experiences with flights on other airlines though.